Tom Cruise Hair Transplant Update. We are updating this post simply to share some reports about Tom undergoing some hair treatment procedures. So it ain’t just Ted Casablanca who’s saying stuff about our Tommy’s tresses.

Meanwhile a Star Magazine report quoted an insider who claims to know something about the Hollywood A-Lister’s hair secret. Here’s the quote: “Tom is using Rogaine because his (hair) is thinning. Plus he gets weekly massages to stimulate growth.”

Whether or not you believe these stories is, of course, entirely up to you. But here’s a photo which shows Tom with a receding hairline and which is being used by the “Tom Cruise Had a Hair Transplant” Camp as proof that our Tommy boy has some hair issues and that he’d been fixing them. 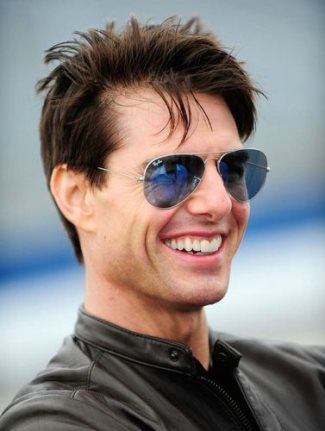 …..
Tom Cruise Hair Transplant (Published 12 July 2010). Did Tom Cruise ever have a hair transplant? Well, his camp is denying reports that he ever had a hair transplant or that he uses hair-saving products. However, some people who are in the business of looking at celebrity hair are saying that our Tom must have done (or is doing) something to preserve his precious crowning glory.

For instance, Ted Casablanca thinks that our Tom has underwent some hair “treatment” or should have one:

A super-savvy reader alerted me that in certain paparazzi pics of Tommy C., when the breeze is blowing just so, his front follicles look (perish the thought, and shield your eyes, Tommy-lovin’ Ted!)…rather, well, curious.

Now, as a girl with a head full of the authentic stuff (no extensions here, thankyouverymuch!), I happen to know that hair naturally tends to grow in single strands, not small clumps. By the looks of Tom’s tresses, I can’t help but wonder, has he become a member of the Hair Club for Men?

And if, instead, it’s just a little natural thinning, maybe he should consider joining. Because I’d be willing to bet the anti-drug crusader is opposed to poppin’ Propecia as well as Prozac. 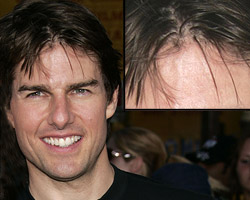 But that’s Ted being Ted, making up stories and stuff. So we don’t know whether or not Tom ever had any hair implant. What we do know is that Tom Cruise had some kind of, let’s call it “bald transplant”, when he played the role of fictional movie mogul Len Grossman. 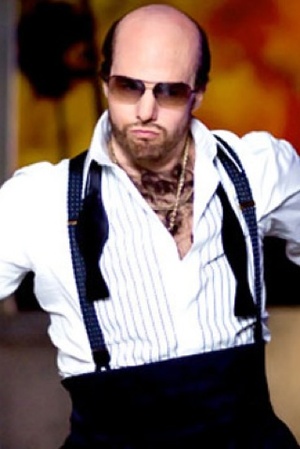 A balding Tom Cruise as Len Grossman. Maybe they can get some hair from his chest and transfer it to his head? 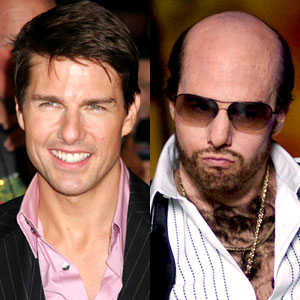