Here’s what he tweeted to his followers: “25 yrs ago got a hair trans cause wanted 2 look like hero Bruce Jenner. Monday went 2 Doc @CraigZiering who did Caitlin Jenner. #LoveWins”.

No comment yet from Caitlyn Jenner either confirming or denying that she was also Dr. Craig’s hair patient. Whether or not Tom Arnold had a hair transplant has been the subject of speculation of hair-focused websites.

Anyhoo, in an interview with the Daily Mail, the True Lies actor had more to say on why he opted to undergo hair transplant surgery: “I love my father. But I don’t want to look exactly like my father until I absolutely have to. I’d like to say I went to Dr. Ziering because as an actor I needed more hair, but that’s not true. I work with talented hair people who work miracles. I’d love to say I went because I have a hot younger wife and I felt pressured, (I do but she has never said a negative thing about my hair). I went for my ego. To make me feel better about me.”

Tom Arnold Hair Transplant Before and After. Of course, we can’t do a post on Tom Arnold hair transplant without showing you some before and after photos, no? Well, we will give you something better — the evolution of his hair from the 1990s to 2015. Check ’em out: 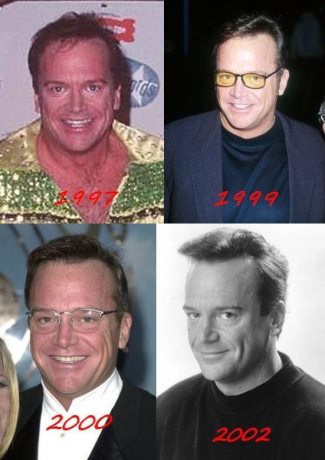 Which of these Tom Arnold hairstyle do you like best? 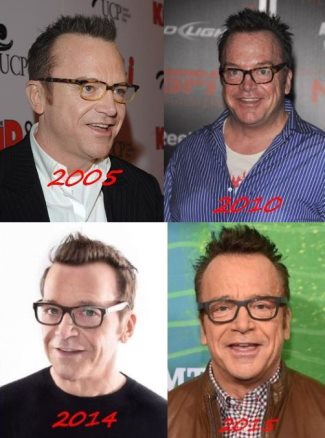 Now, are we the only ones who think that Tom’s hair haven’t changed at all? Seems like his hairline has remained basically the same. But then again, maybe that’s what he wanted — he wanted to maintain his hairline and had some surgeries to prevent it from receding further.

Anyhoo, here’s what the comedian says about his hair doctor: “What they do is more art than surgery. They brought in my temples and inspire what my ego wanted, my hairline looks natural. Since they do individual hairs I can’t even tell what’s supposed to be there and what was moved from the back of my head. And like a new man with a new lease of life and a bouffant head of hair he was back on camera four days after the procedure. I was able to shoot on HD camera four days after surgery and no one would know.”

He adds: “I recommend Dr Ziering so you don’t have to call your lame male friends. I’m not too proud to help my fellow man or woman, am not a paid spokesman and I paid full price, plus I’ve got a perfect little son and that’s all that matters.”