Todd Herzog Spencer Duhm: Gay Survivor Lovers. Hey, apparently our current reality TV fave, Spencer Duhm of Survivor Tocantins is hooking up with Survivor China winner Todd Herzog. We’d rather that Spencer hook up with JP Calderon or Brad Virata but its his choice so let’s leave the picking to him. For the record, we find Todd to be kinda annoying during his Survivor season and we’re not very impressed when he won. 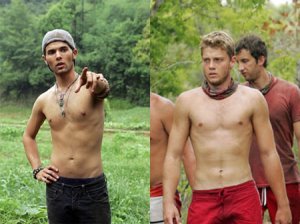 Here’s Todd, in an interview with After Elton, talking about his relationship with Spencer: “We have such extreme opposite tastes but so much in common. He LOVES sports and I prefer the solo outdoors stuff, I like to dress super trendy he’s into plain T’s, I love alternative music he likes Whitney! (shhh) We both love to keep active and busy, we love trying new things and traveling. I was attracted to him the moment I saw him, mainly because he’s got this confidence that pours out of him and a piercing stare that you can’t help but notice so I went ‘fishing’! Started talking with him and reeled him in! He’s coming to stay with me all next week, and I with him next month. I’ll be in New York for his finale in May and we are planning a huge trip this summer … So hopefully things go well! I’m like a wall that usually wont let anyone one close to me, but he’s doing a great job at breaking it down so I have high hopes.”

Let’s call this the war of the Survivor gays. On one corner stands Spencer Duhm, the cute and hunky gay 19 year old castaway of Survivor Tocantins which is currently airing. On the other corner is lawyer Charlie “I have a crush on Marcus” Herschel of the preceding season, Survivor Gabon.

Spencer throw the first punch by saying this in an interview with Reality Blurred: “First of all, I’m not crushin on Marcus. I understand, first of all, you can do whatever you want, but, have a little discretion, he’s straight. Like, leave the man alone. Ugh. It just baffles me. Every time he opens his mouth it’s just like ‘I love Marcus, Marcus is great. I feel protective when he’s around. I feel nervous when he’s not around.’ It’s kind of like alright you have a serious crush on him. This isn’t jokin. Stop. Just stop. I’m embarrassed for him. I know he’s gotta be sitting at home embarrassed, red-faced.”

Well, we are not embarrassed for Charlie but we understand Spencer’s point. It does seem like Charlie talked a lot about Marcus every time he appeared on television.

This guy is cute. In fact, he is too cute to be straight. And it turns out that he is indeed not straight. Too bad for fangirls. But fan-gays will surely be cheering for him especially because he’s such a hunk. Go, Spencer! Take that shirt off, will ya?