You’re enjoying yourself getting wet, eh? Why didn’t you invite us to go swimming with you? Hehe. We are getting pathetic aren’t we? Anyhoo here are some Toby Flood shirtless swimming photos for Toby Famewatchers. 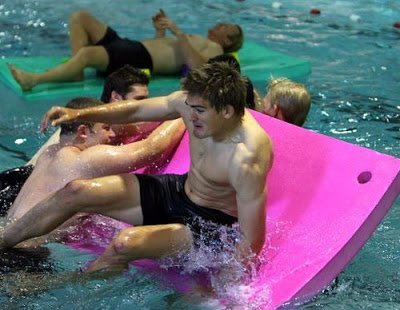 Unfortunately, these are all the Toby Flood shirtless pics we can find. We’ll do an update if we find more in the future. 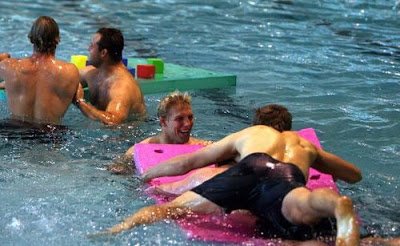 For those of you not familiar with this rugby stud, here are some ten things you should know about him:

1. He is a rugby union player for the Leicester Tigers. Before the Tigers, he played for the Newcastle Falcons from 2004-08.

2. Some of you are asking whether Toby Flood has a girlfriend (with search words like “Toby Flood girlfriend”, “Toby Flood wife”, or “who is Toby Flood dating”) unfortunately, we don’t have an answer for you. His wiki profile doesn’t say anything about whether he’s in a relationship. Neither do news reports or articles say anything about about our sexy Toby’s relationship status. Maybe he is already married? Or maybe he is gay and has a boyfriend? Who knows. But we will update this post once we find out more.

3. Toby’s got some famous grandfathers in the persons of British stage and television actor Gerald Flood as well as German actor Albert Lieven.

5. Toby plans to be a lawyer once his rugby days are over. This sports jock is also, apparently, some kind of a nerd: he graduated from Northumbria University with a degree in business management and also has a graduate diploma in law.

6. He and his Newcastle teammates did some cross-dressing when visiting clubs. From a Daily Mail interview:

We had a cross-dressing phase at my old club, Newcastle, but the floral dresses, heels and handbags didn’t go down too well with some of the establishments we frequented. One year we all went out as Smurfs…

7. According to the Daily Mail, our Toby “lives with Leicester club-mate and England tighthead Dan Cole, who does his share of the cooking but apparently ‘doesn’t share the fake tan’.” Isn’t that kind of cool? Two hunky sports guys shacking up.

8. He likes gardening. Here’s what he said about his hobby in an interview with The Independent:

I find gardening really therapeutic. And it’s not just that I like to collect stuff to put on the bonfire… the people who owned my house before put in a lot of time in the garden, so if I just left it I’d feel guilty. There’s peonies, foxgloves, rhododendron, hydrangea, and I monitor it, because I’m worried they might come round the corner one day and not like what they see. I come back from training and water the plants, tidy things up…

9. He is, to borrow the words of The Independent, male model pretty. In a story by the Daily Mail, he tells us something about his fashion style:

10. He doesn’t mind taking his clothes off for charity: “I would get my kit off, but only for charity. The guys at my club, Leicester Tigers, have done some fun tops-off pictures for calendars to raise money for Matt Hampson, who was paralysed a couple of seasons back.”

Toby Flood Modeling Photos. We haven’t found any more Toby Flood shirtless photos but we did find these modeling pics of our Toby. 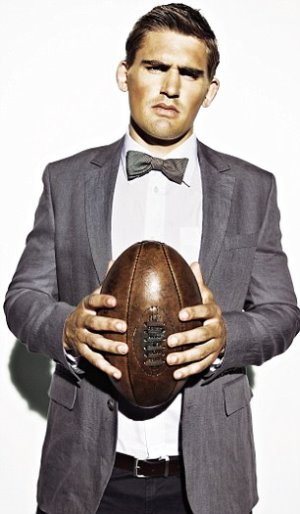 Whether shirtless or not, there is no denying that our guy sizzles with masculinity, no?