Tim Robbins Underwear. Photos of American actor/director Tim Robbins in his awesome jockstrap for the baseball comedy movie, Bull Durham. His pitching powers didn’t impress GQ Magazine but we love guys in jockstraps so we give him a ten and two thumbs up for his outfit.

Who says you can’t play baseball in your underwear?

For more male celebrities pictured in their jockstrap underwear, check out our previous posts on the following: footballers Julien Arias and Geoffroy Messina, the Australian rugby god Nick Youngquest, and actors Brett Chuckerman and Alan Ritchson.

Oh, about Tim’s pitching skills in the Bull Durham movie, here’s what GQ says about it:

Yeah, I know Ebby Calvin “Nuke” LaLoosh is supposed to be nuttily wild, but he’s also supposed to be able to throw ninety-five miles an hour, even when he’s hitting the mascot. Those ridiculous mechanics may be good for laughs—okay, a smile—but they sure wouldn’t produce a baseball-groupie-moistening radar reading. Robbins is a serious lefty when it comes to politics, and from the way he threw a baseball right-handed in this flick, he might just be one physiologically, too. The labored windup, the tortured delivery… Come to think of it, the guy really did look like he was throwing with his opposite hand. If the key to athletic grace is effortlessness, Robbins’s all-moving-parts windup—more Rube Goldberg than Rube Waddell—is a study in straining.

Who knew GQ writers can be so catty, no? Here’s a Tim Robbins shirtless in bed photo for those of you looking for one. 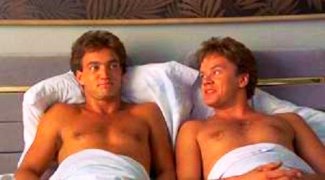 They looked like the perfect couple despite the age difference (she’s older by 12 years) but some good things never last. Oh, well.