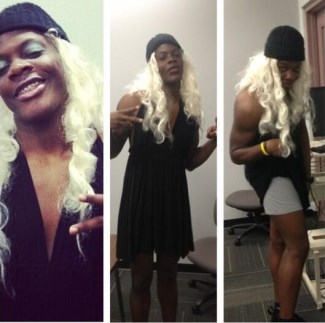 Look who’s dressing up as a woman? It’s Teddy Bridgewater, the rookie quarterback for the Minnesota Vikings. Now, before you reach the conclusion that the 21-year-old football star is a cross-dressing drag queen, you should know that he’s only dressing up as a woman for a gender class in college.

More from Josh Sanchez of fansided.com:

Louisville Cardinals quarterback Teddy Bridgewater is one of the best NFL prospects in college football and is the leader of a Cardinals team that has a legitimate shot of being a top five team in the nation.

While Bridgewater is an incredible talent on the football, he is looking to boost his grades in the classroom.

Bridgewater is in a gender studies class at Louisville and extra credit was given to students that would break gender norms. Bridgewater jumped on the opportunity and decided to dress up in drag and provide the photo evidence, because who doesn’t need a little extra credit?

I always get a kick out of people who don’t take themselves so seriously, so it is nice to see Bridgewater having a little fun and letting loose.

We like us our guys who don’t take themselves seriously too. By the way, you know what this tells us about Teddy? That he is secure in his masculinity. Those who are insecure about themselves, but who’d like the world to think they are macho, would not touch a woman’s dress with a ten-foot pole. 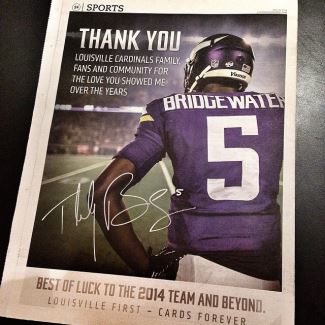 Teddy Bridgewater Chistian Quarterback. Teddy is a member of the Fellowship of Christian Athletes or FCA in the University of Louisville. He tells us more about how his faith shaped him as a person in this article from The Southeast Outlook:

Teddy Bridgewater grew up the youngest of four children raised by a single mom in Miami.

“As a 9-year-old, I was running into trouble, hanging out with the wrong crowd,” Bridgewater said. “I have a single-parent background, moving often from home to home. A lot was happening with my family. One Sunday I went to the front of the church and poured my heart out to God. He gets all the praise and all the glory for what’s happened in my life.”

Bridgewater came to U of L after what he described as a complicated series of missteps by other universities, including the University of Miami and LSU. Those missteps became Louisville’s gain.

Bridgewater said, “FCA has been a phenomenal part of my life.”

‘It’s more than getting together to read the Bible and sing a song,” he said. “FCA has been phenomenal for me. We get in-depth Bible study.”

One of Bridgewater’s favorite Bible verses is Philippians 4:13: “I can do everything through him who gives me strength.”

He graduated with a degree in sports administration. 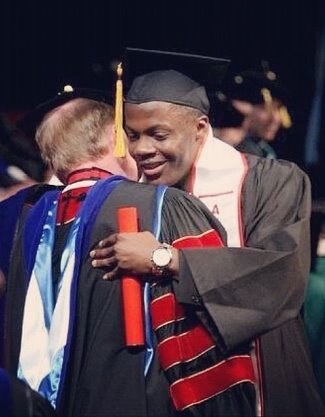 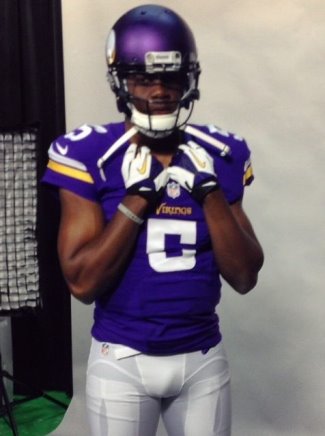 So how is Teddy doing since he joined the big leagues? He’s doing really well, apparently. The Bleacher Report tells us more about his rookie days as a Viking:

Minnesota Vikings rookie quarterback Teddy Bridgewater will begin his NFL career as the backup to veteran Matt Cassel, but a preseason’s worth of work has provided enough evidence to suggest Bridgewater is ready to play in the NFL right now.

Q: Who came up for your graduation?
BRIDGEWATER: My mom, my girlfriend, my two best friends.

Our quest now is to find a photo of Teddy and his girlfriend. If you happen to have one and can share it, do send us a copy for your fellow Famewatchers. If you also happen to know the lucky girl, do tell us her name in the comments.

That’s it for now fellow FootballWatchers!