Celebrity Leather Pants: Tahj Mowry in Modern Prophecy Leather Outfits. Time for more mens leather pants courtesy of Bellus Magazine (bellusmagazine.com) who shot this fabulous photo of Baby Daddy actor Tahj Mowry. Leather sure is one of the sexiest material for men’s trousers, isn’t it? The downside, unfortunately, is that leather is not breathable. So its great to look at but it scores low in the “comfortable to wear” department.

Tahj and his Baby Daddy co-stars Derek Theler and Jean Luc Bilodeau attending some kind of toga party. Or maybe they’re acting the role of Roman Senators? If you know the story behind this intriguing pic, do tell in the comments. 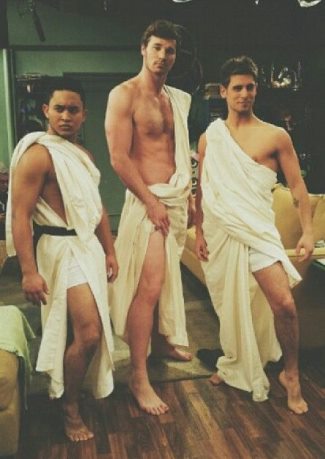 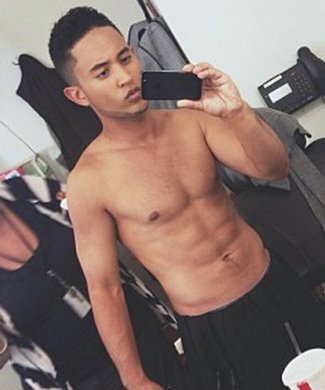 Tahj Mowry Underwear. For those who are wondering, our Tahj (or at least his Baby Daddy character Tucker Thurgood Marshall Dobbs) likes to wear boxers underwear rather than some skimpy briefs.

Tahj is apparently enjoying his gig with Baby Daddy. Here’s what he says in an interview with Bellus Magazine:

BM: How are you enjoying working on the TV show “Baby Daddy?
TM: I am loving the show! The cast the crew everyone is such a delight and we have so much fun. It’s truly a blessing to love a job so much and I definitely do. It’s also a new type of character for me which is always fun. I grew up working in sitcom, so it’s just like being home for me.
…
BM: What do you do to keep you motivated for work?
TM: I am always working on my craft. My art. Acting is what I do. I am motivated because I wanna show people what I can do and how much I appreciate the art. I do it because I love it. It drives me and it challenges me at the same time. There is nothing better than absolutely loving what you do and I do. That in itself is a motivator as is my family.

BM: What advice would you give to the aspiring actors who want to make it in the acting world?
TM: Make sure it’s something you definitely want to do. You have to have a passion for it! You also have to have thick skin. Not everyone will like you and you will definitely be turned down… you just have to be ready to work for it and have the passion to succeed and to never give up.

Is Tahj Mowry Gay or Straight? Apparently, some peeps are spreading some gay rumor about Tahj so he was compelled to say something about it. From boldandsugar.com:

The younger brother of Tia and Tamera Mowry has long been the target of homosexual allegations, even after attempting to set the record straight via Twitter:

“I wonder when gay guys r gonna realize they cant have me. Im straight. #getoverit Not every good lookin dude is gay. Im flattered, but #fail” – Tahj Mowry via Twitter

Even now, the rumors continue to spread, just like the ones about Chris Brown (Which I can only hope are just rumors). There is a trend with people labeling good-looking, fashionable men as “closet homosexual”. What is it with our fascination to turn out straight people? Let’s be real, gays. We’ve all had crushes on heterosexuals, but what about that line you shouldn’t cross. Surely you wouldn’t want a member of the opposite sex constantly trying to make you straight, right? Think about it.

Haha. Seems like that’s directed to our gay friend Kevin! What say you Kevin? We agree with Bold and Sugar that you should stop thinking that all good looking guys are a friend of Dorothy!

Tahj Mowry Girlfriend. Is Tahj dating anyone at the moment? Or is he single and available? It’s the former, baby. He is dating a girl named Erica Ocampo. Here’s a pic of the two lovebirds during a vacation in Bali, Indonesia: 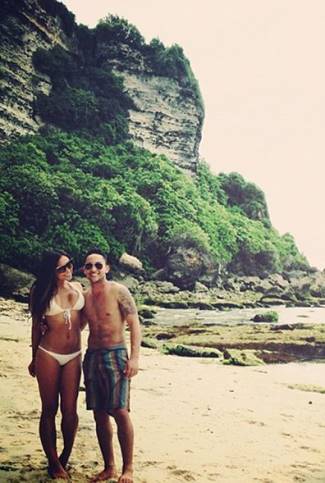