Swedish Mens Underwear: Bjorn Borg For Everyman. If you are wondering how Swedish tennis great Bjorn Borg was able to transform himself into an underwear-mogul (his underwear line is reportedly the top-selling brand in Sweden), these ads should give us a pretty good idea. There is nothing more appealing than featuring male models in their underwear doing stuff that people do in their daily lives.

Who among us who ride subways (or who take public transport) does not identify with these models and go, “Hey, I take the subway too! I want me a Bjorn Borg underwear!” 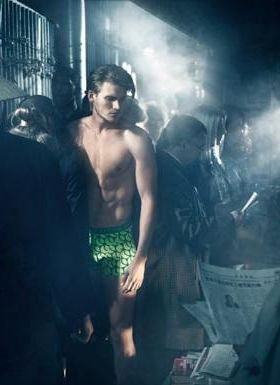 Bjorn Borg modeling underwear as outerwear! In the real world, this guy would be arrested for indecent exposure, right? Hehe.

More Swedish Mens Underwear (Update: 4 March 2017). Aside from Bjorn Borg, some Swedish mens underwear brands you might want to check out include Bread and Boxers, Frank Dandy, and The White Briefs.

Frank Dandy. Check out these male models rocking their Frank Dandy long johns underwear. According to the label’s Facebook page, “Frank Dandy is an avant-garde underwear fashion brand and one of Scandinavia’s leading underwear manufacturers”.