Sumo Wrestling Underwear (posted 4 June 2015). What do you call the thing The Bachelorette contestants wore during the most recent episode of the ABC reality show? Our friend Deena insists it’s called sumo wrestling underwear but we’re not sure if she is right.

It’s not exactly underwear because its visible (unless its a Japanese version of underwear-as-outerwear). It’s diaper-like but no one in his right might (specially these Bachelorette dudes) are going to call it a diaper. And it does not look like the Japanese loincloth (aka fundoshi) either. 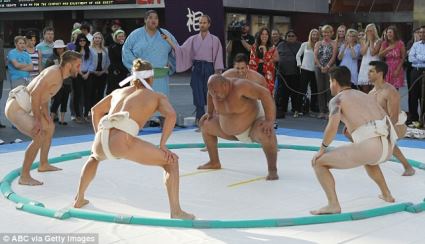 In our search for the proper name for these guy’s garment, we went to Yahoo Answers! and came across these suggested answers for the thing that sumo wrestlers wear:

Then we came across the right answer: Mawashi. And whoever called it a loincloth is correct too. Wikipedia (aka the fountain of all information) tells us more:

In sumo, a mawashi is the belt (loincloth) that the rikishi (or sumo wrestler) wears during training or in competition. Upper ranked professional wrestlers wear a keshō-mawashi (see below) as part of the ring entry ceremony or dohyō-iri.

Apparently, the way you wear your mawashi can have an impact on a wrestling match.

More from wikipedia: “Sometimes a rikishi may wear his mawashi in such a way as to give him some advantage over his opponent. He may wear it loosely to make it more difficult to be thrown, or he may wrap it tightly and splash a little water on it to help prevent his opponent from getting a good grip on it. His choice will depend on the type of techniques he prefers to employ in his bouts. Thus a wrestler preferring belt sumo will usually wear it more loosely, while those preferring pushing techniques will tend to wear the mawashi more tightly.”

Now that we know the proper word for the sumo wrestling underwear, here are more photos of The Bachelorette contestants wearing their mawashi sumo wrestler’s loincloth. 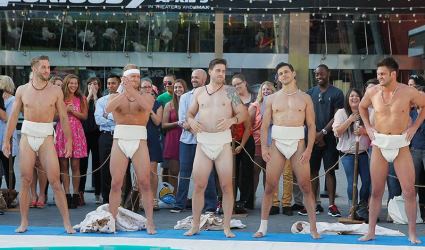 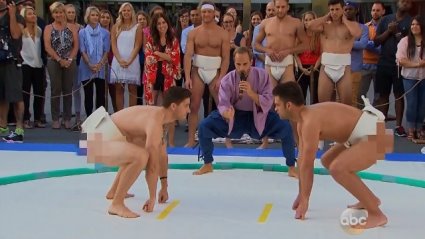 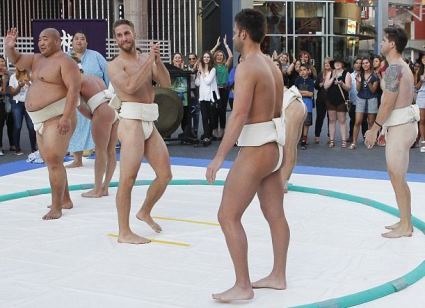 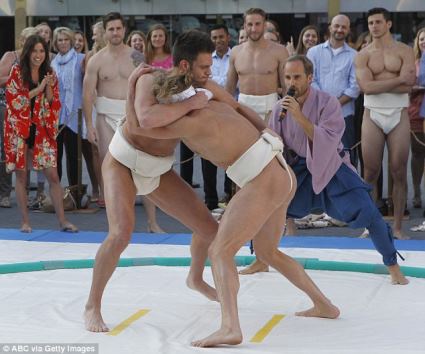 The thing also does look like a belt, no?