Suits for Men in Their Thirties: Fashion Style of Male Celebrities. Let’s have more male celebrity suit and tie fashion and this time let’s focus on 30-something celebs and their choice of suits. We begin with David Beckham, the most famous soccer player these days (says Kevin but Toby disagrees and nominates Cristiano Ronaldo) who’s looking seriously professorial in his Simon Spurr pinstripe suit. 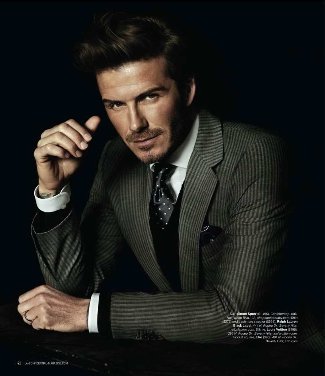 Next up in our list of suit-wearing 30-something dude is Dollhouse actor Tanmoh Penikett. What suit is he wearing? That’s a two-button suit from the Lauren menswear collection by Ralph Lauren. Watch out for this 37-year-old Canadian hunk as Emerson in the upcoming Man of Steel (Superman) movie headlined by Henry Cavill.

Another Canadian hottie spotted looking fabulous in a men’s suit is our imaginary boyfriend Stephen Amell, star of the upcoming Arrow show on The CW. You can read more/see more of him in an earlier post we wrote several days ago: Stephen Amell Underwear. Did we say he is our boyfriend? Yes he is but we are a very bad girlfriend because we don’t even know the brand of the outfit he is wearing. Although we do know that he wears Calvin Klein briefs. Joking. Hehehe. 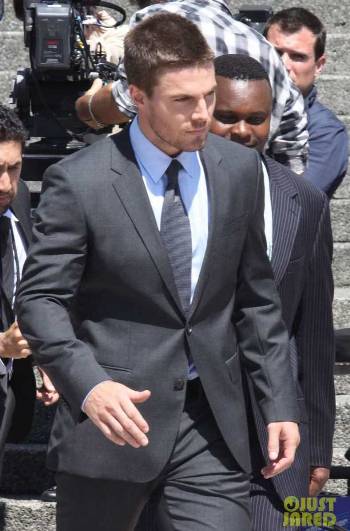 Next up in our men in suits is 32-year-old Formula One champion Jenson Button. We know that he’s wearing a Boss Black suit from the label’s Fall/Winter 2011-2012 Menswear Collection. Would any of you know if he is in a relationship? We blogged about him dating Japanese model Jessica Michibata but they sort of have a Rachel-Ross on-again off-again relationship and we don’t know if they’re still “on”. If not, we’d take him as imaginary boyfriend number 5. Hehehe.

Welsh actor Luke Evans is looking good in his Giorgio Armani suit from the Italian fashion house’s Spring/Summer 2011 Menswear Collection. Watch out for him as Bard the Bowman in Peter Jackson’s much-awaited movie version of The Hobbit. We expect Luke’s star to shine brighter in Hollywood with his Hobbit role. 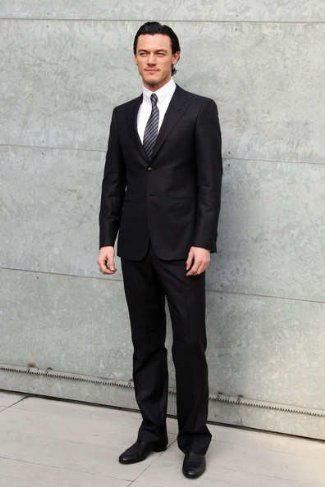 Want more handsome men in fabulous suits? Check out our post on Suits for Men in Their Twenties.