Steven Adams Girlfriend, Shirtless Photo, Shoe Size, & Tattoo. So, fellow Famewatchers, have you found an imaginary basketball boyfriend among the pro-basketball rookies from the recent NBA draft? We did! Yay! His name is Steven Adams. He is from New Zealand. Double yay! He is supertall (a legitimate 7-footer according to one journalist) and, not unexpectedly, he has a pretty big feet. Triple yay! In the 2013 NBA Draft, he was the 12th overall draft pick courtesy of the Oklahoma City Thunders.

Now, Steven may have a girlfriend in real life but that doesn’t mean we can’t think of him as a our beau when our IRL beau is watching basketball, right? Anyhoo, here are Some Things You Should Know Steven Adams (aka our latest basketball beau) if you want to become a member of his internet groupies.

1. Steven Adams Girlfriend. His girlfriend’s name is Kayla Kiriau. She is also a Kiwi. She is also a basketball athlete who currently plays for Sheridan College in Wyoming. Here’s a pic of Steve and girlfriend Kayla (courtesy of stuff.co.nz). 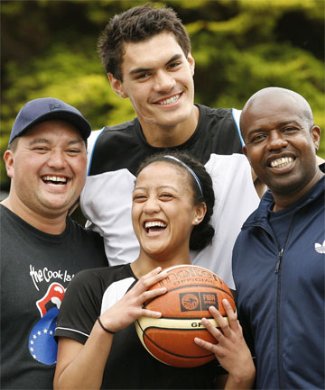 Aside from Steven Adams girlfriend, the other people in the above pic are Steve’s mentor mentor Kenny McFadden (right) and Steve’s half-brother Moses Beckham (left).

Here’s another photo of Kayla aka Steven Adams girlfriend. 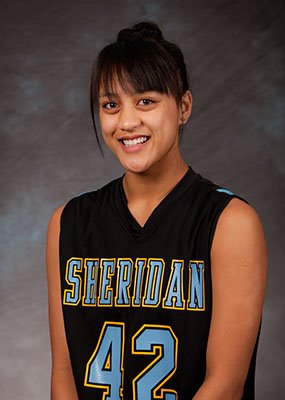 Update: There’s a New Steven Adams Girlfriend (8 March 2017). According to Women’s Day (womensday.co.nz), our basketball star has got himself a new beau. She is also a Kiwi and her name is Ezel Kokcu. 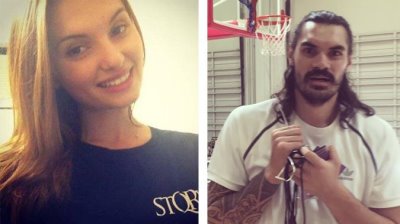 Another photo of the new Steven Adams girlfriend with her basketball beau. 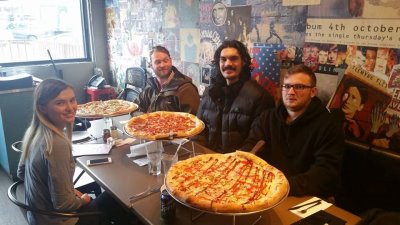 2. Steven Adams Brothers. Aside from Moses Beckham, Steven has 16 other siblings and half-siblings. They are all sporty types and, in fact, one of them, Valerie Adams, is a two-time Olympic gold medalist in shot-put (2008 Beijing Olympics and 2012 London Olympic Games).

3. How big is Steven Adam’s feet? An article in the Dominion Post (via stuff.co.nz) mentions that Steven has a size-20 feet. Said article however is from two years ago so its possible that he added some inches to his feet. Here’s a pic of Steven’s shoes (via his Twitter page). 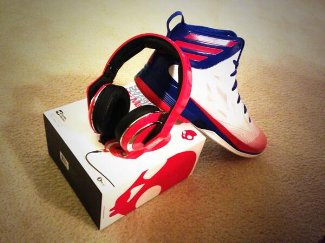 4. Steven Adams Ethnic Background. Although Steven is every inch a Kiwi, Tonga and England can also lay claim to him because his mom (Lilika Ngauamo) is from Tonga while his dad (Sydney “Sid” Adams) is from good old England or Merrie Olde England (where the sun does not rise and the day always rains).

5. Steven Adams Shirtless. He’s got a tattoo on his chest. Check it out below (pic is from Steven’s Twitter account). He should have more shirtless photos like this, eh? What does his tattoo mean? We hope to find out in the coming days. Update: His tattoo apparently features the Pittsburgh Panthers “gash” filled with “Pacific island patterns”. [Want more shirtless NBA basketball players?] 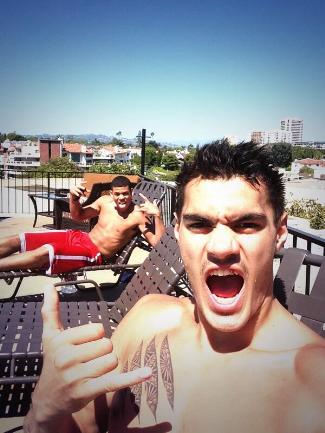 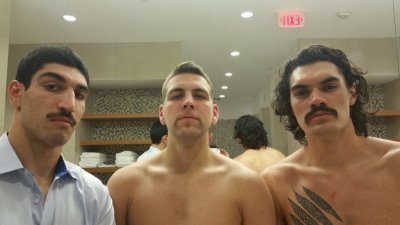 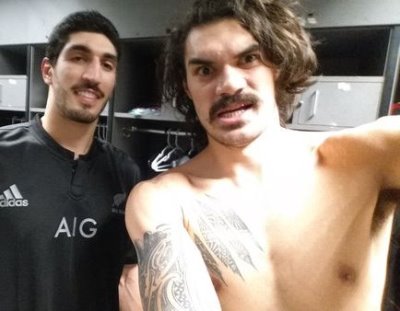 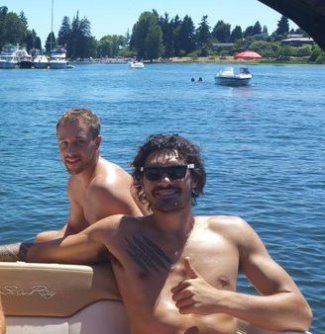 6. He clearly needs a stylist because his ensemble in the pic below (via his Twitter) is too much. We blame the tie. 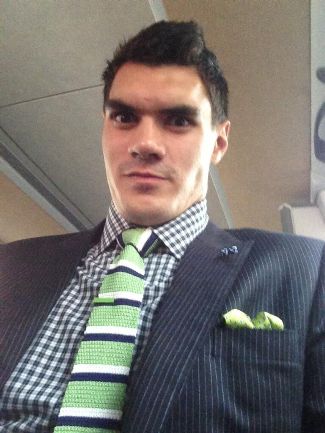 On the other hand, he’s looking really great in the pic below. We’re loving everything he’s wearing from that slim cardigan to his purplish shirt and tie to his sexy khaki trousers. Very modelesque. Maybe he does not need a stylist after all. 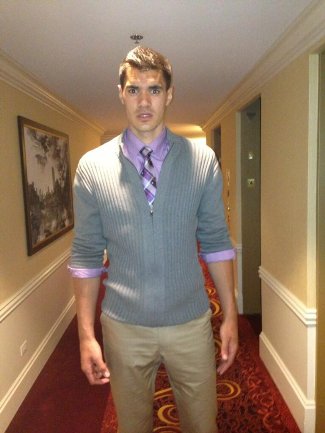 7. What are Steven’s strengths and weaknesses as a basketball player? Here’s what nba.com says about his basketball skills:

And here’s the site’s overall projection of Steven Adams:

Most serious observers of the draft, whether from NBA teams or in the media, thought Adams could have benefitted from another year in college so he could work on his low-post scoring skills. But Adams, a native of New Zealand, comes from a large family, and he felt an obligation to turn pro so he could help financially. He should be able to do that because he’ll be a first-round draft pick. It’ll take a couple of years before he’s ready to contribute on a regular basis, but he’s got the size, athletic ability and work ethic that spell potential.

Pretty positive assessment, eh? What we love the most is what they said about his work ethic. Heaven knows how many talented and gifted athletes didn’t realize their potential because of plain laziness!!!

8. What are the experts saying about the Thunders’ draft pick? Well, here’s what they are saying:

Chris Mannix of INSIDE THE NBA on Sports Illustrated: Steven Adams is a classic Oklahoma City pick: a raw, enormously underdeveloped center with perhaps more potential than any player in the draft.

Dan O’Brien of the Bleacher Report praised the pick: The Oklahoma City Thunder filled a pressing need in the post by snatching New Zealand big man Steven Adams. It’s the pick OKC undoubtedly wanted and needed entering the draft at the No. 12 slot, so it’s an easy A here.

Adams will be one of the most intriguing rookies because of his sheer size and mobility. Thunder fans can’t wait to see him run end-to-end, finish plays and showcase his evolving offensive skill set. They didn’t pick him to take over the team from day one. A little patience will see him become one of the best anchors in the league.

Adi Joseph of USA Today Sports: The New Zealander didn’t do much in his one season at Pitt, but he has tremendous potential because of his 7-foot frame and athleticism. He’s very raw but shows tremendous enthusiasm on the court and is a charismatic person off it, meaning he aced the interview process. Adams needs a few years, which makes him a strange pick for a team that needs to win now (and needs help inside now). His potential is tough not to like.

9. He’s oh-so-cute even when he’s trying to be scary. He’s giving us the “Children of the Corn” stare but we’re thinking, “That tank top shirt is askew but he’s really, really cute!” 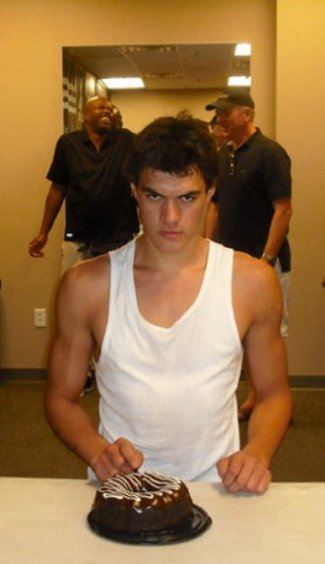