Stephen “Steve” Wu of Willow Creek Chicago Church: Hypocrite of the Day. Another evangelical pastor goes down the drain because of “sexual impropriety”. We wonder what that means. Does he have a gay lover on the side like Ted Haggard? We won’t be surprised, if that happens to be the case. 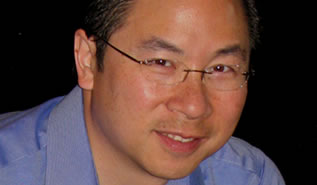 From the Chicago Breaking News: “The pastor of Willow Creek Chicago — the city campus of the evangelical megachurch Willow Creek Community Church — has resigned and admitted to “sexual impurity,” a church spokesman said.
The pastor, Rev. Steve Wu, could not be reached, and the church would specify what took place.”

According to the report Wu, who moved from Silicon Valley in 2006, was hired by senior pastor Rev. Bill Hybels to lead Willow Creek Chicago which is the downtown branch of the South Barrington-based church.

More from Chicago Breaking News: “Under Wu, Willow Creek Chicago began holding Sunday services at the historic Auditorium Theatre in October 2006, becoming Willow Creek’s fifth campus and drawing a diverse congregation of more than 1,200 worshipers to the new church. Willow Creek Community Church is one of the most influential evangelical churches in the nation with more than 20,000 members who worship at six locations throughout Illinois, as well as an international church community.”

Hypocrite of the Day Update: Since we blogged about this, a lot of googlers are coming here with search words that go, “is Steve Wu gay”, “gay Steve Wu”, and the like. We don’t know if he is gay or not and we don’t care if he is. If it does turn out that he is gay, we won’t be surprised if gay-sex obsessed evangelical “Christians” will blame the gays, rather than their own hypocrisy, for the downfall of Steve Wu.

Time to remove the mote in your eyes, “Christians”.