Shirtless Golfers. Time to add to our ever growing list of shirtless golfers. Famewatchers, meet Greg Owen, our first shirtless golfer of the day! He’s making the news for stripping to his boxers underwear in order to save a baby bird. The Golf Digest has the details:

Owen was walking off the 16th green when he saw a blue jay fall out of a tree and then crash land in the pond that surrounds one of golf’s most famous holes when it tried to fly away. So Owen switched into lifeguard mode, stripped down, and waded into the water to save the bird. Fortunately, his instructor, Tony Ziegler, got it all on video.

Watch how it all went down:

Is this guy married? Because if he’s not there are millions of ladies out there who’d want to marry him. His caring and nurturing ways is what we ladies look for in a man, right?

Greg Owen, for those of you into golf statistics, has three professional golf titles to his name. In the majors, he sported his best finish to date when he tied for 20th place at the 2015 The Open Championship (aka the British Open).

Our second shirtless golfer of the day is David Howell who, like Greg, is a British dude. Check out his shirtless pics: 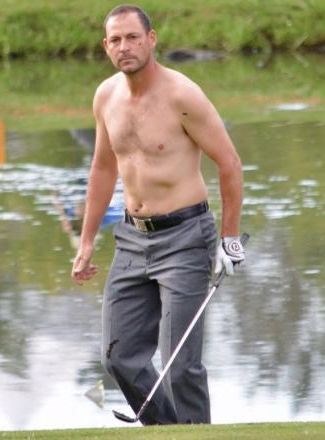 This is how you play golf shirtless! 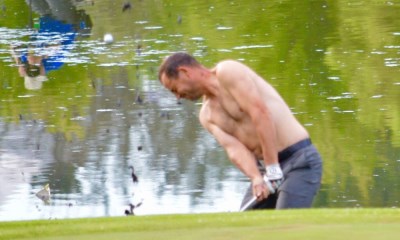 So what’s the story behind the shirtless golfing? Apparently, he didn’t want to get his new shirt dirty. Now, this is another shirtless golfer guy we’d like to marry. Cleanliness is next to godliness after all, right? In an interview with the Swindon Advertiser, David talks about his decision to chuck off his shirt while playing golf:

“It was our first hole and it was all a little bit ironic really,” Howell told the Adver. “As we were walking to the range and as it was a hot day, my caddie asked me if it was alright if we took the waterproofs out.

“We’d normally keep the waterproofs in for any eventuality, such as that. Ironically, I happened to say ‘leave them out I’m sure we’ll be fine’. I thought I had hit a nice shot at the first but came up just short in the rough and the ball rolled back into the water hazard, but in the mud rather than the water.

“I had my brand new t-shirt on with two new sponsors (National Rent-A-Car and Burrington Estates), thinking I was looking a million dollars.

“I got there and it was playable but I knew I was going to get covered in mud. Ernie (Els) offered me his waterproofs to put on but I didn’t fancy covering them in oily black mud, so I thought the best thing was to strip my top off and give it a hack.

“I was surprised there were photos because it was so early in the morning.”

So what do you think of our first shirtless golfers of the year? If you want more shirtless golfers, you might want to check out an earlier blog post we published three years ago: Male Golfers Underwear.