Sharon Stone Anti-Aging Secret? Fifty-one-year old Sharon Stone is back in the limelight and it looks like she hasn’t aged at all. So what’s her anti-aging secret? Here’s what we came up with as possible explanations.

So which of the above could be the Sharon Stone anti-aging secret? Can any of them explain her eternally youthful look? 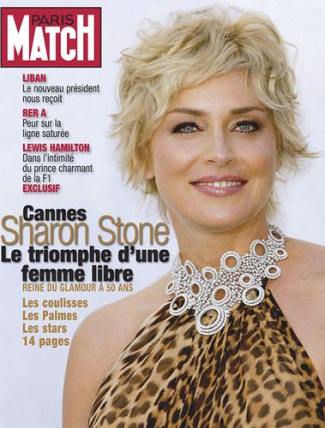 Anyhoo, here are some more pics from Sharon from her Paris Match Magazine cover. We must say that she has done a better job of looking young than Madonna. UPDATE: Sorry, we had to delete the saucy pics.

Did some University of Southern California (USC) scientists (Valter Longo, Min Wei, and Paola Fabrizio) discover the “fountain of youth”? If they did, then Ponce de Leon made a really big mistake when he went looking for a literal fountain. He should have explored the food he was eating instead. No big secret, huh?

Anyways, according to a study by said USC researchers, glycerol has a powerful anti-aging effect — in yeast.

According to a UPI report:

“Yeast cells maintained on a glycerol diet live twice as long as normal — as long as yeast cells on a severe caloric-restriction diet — and are more resistant to cell damage.”

Our attempt of translating said research result: No need to restrict your diet anymore, you figure-conscious celebrities and non-celebrities, you can achieve the same thing by sticking to a glycerol diet.

The scientists said their study is the first to propose that “dietary substitution” can replace “dietary restriction” in a living species. “If you add glycerol, or restrict caloric intake, you obtain the same effect,” said senior author Valter Longo. “It’s as good as calorie restriction, yet cells can take it up and utilize it to generate energy or for the synthesis of cellular components.”

If the research is validated, expect some glycerol diet fad coming up in the future.