Samantha Burke Jude Law Baby Mama: Will They Get Married? Meet Samantha Burke, Jude Law’s baby mama who’s very much pregnant. The two reportedly hooked up when he was shooting his Sherlock Holmes movie. How boring. And we thought he was hooking up with his co-star Robert Downey Jr. Hehe.

Anyways, The Sun is reporting that Jude is “panicking” because his newest baby mama Samantha took some pictures of him and that she might release it to the public. Huh. Unless those pictures show him playing with his wang, we don’t honestly see any reason for him to panic. Now if the photos do show him playing with his wang then it is Samantha’s duty to humanity to release it to the world. 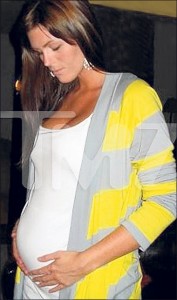 You agree right? It’s about time someone put Beckham and undies  in their proper place. We think Michael Biserta can do it but you gotta be a real celebrity to top Beckham.

Is it me or is Samantha Burke, Jude Law’s baby mama, using her pregnancy (and her future child) to become a celebrity? If so, we will quote girl-kissing Judge Judy and go, “What a despicable thing to do!”

Seriously, what pregnant woman poses in her underwear for a photo meant for public consumption? An attention whore that’s who. Our suspicion that this girl wouldn’t be carrying her pregnancy if she wasn’t knocked up by a celebrity may not be far from the truth.

The Kardashian girls’ may be skanky and all but this Samantha may turn out to be the Queen of The Skank. 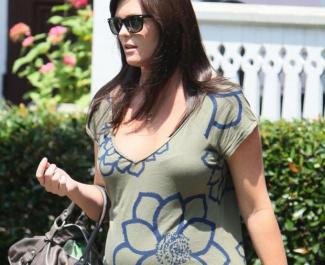 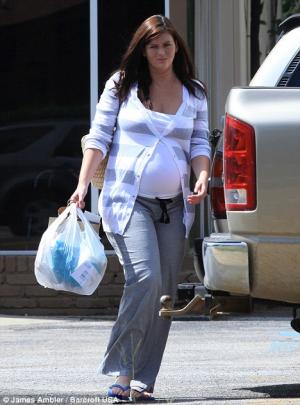 Samantha Burke aka Jude Law’s newest baby mama must have gone out to shop for maternity clothes in preparation for her impending motherhood. She is due in three weeks after all.

According to news reports, the 24-year-old model is considering several offers worth £120,000 from magazines and newspapers for the first photos of her baby girl. We say, “Go for it, girl”.

To be honest, we didn’t like this Samantha girl at first (mainly because of her “pregnant underwear” photo) but she looks somewhat sad in the picture above so we just might join a Team Samantha if there is such a team.