We’ve already found our imaginary American Idol XIII boyfriend in the person of Spencer Lloyd but those of you who are looking for a WGWG (White Guy With Guitar) to cheer for might want to check out Sam Woolf, a 17 year old singer-songwriter from Bradenton, Florida who reportedly made it to Hollywood after his audition in Boston. The spoiler list also tells us that he made it to the Top 30. 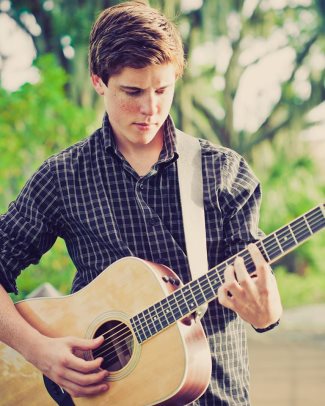 Raise your hand if, when seeing the next picture, you suddenly feel the the urge to pinch Sam’s rosy cheeks. Hehe. 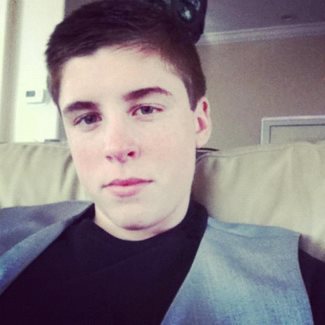 Mjsbigblog.com has some details about our singer/songwriter:

Sam’s grandparents are raising him, after his mother left him at 13, and his father was unable to take care of him due to problems with depression. In the video package, the grandparents are every bit the doting guardians, 100% supportive of Sam’s journey.

This is what a shirtless Sam Woolf will look like when he’s as old as his grandfather. Hehe. Pic is from his Twitter account (@samwoolfmusic). Apparently, there’s an aging app out there which Sam used to generate the kinda scary image. [Update: We deleted the scary image and replaced it with this which we found on his Instagram:

Now, can this guy sing? Well, judge for yourself! Here’s a video of Sam singing Ed Sheeran’s A Team:

MJ’s Big Blog has a report on Sam’s audition:

Guitar in hand, he impressed the judges with a performance of “Lego House” by Ed Sheeran, even if his nerves resulted in a speeded up tempo. Keith calls his pitch “incredible,” even if the fast tempo made it sound like an “auction song.” Jennifer noted his nerves, but said the song eventually “opened up, revealing itself like a flower.”

“Really beautiful. I enjoyed hearing that,” she added.

“He sounds fricking great,” says Harry after Sam left the room, “My daughters are going to go crazy for him.” Indeed, Sam is a sweet-faced young man with an angel voice. He’ll potentially have that teen/granny contingent sewn right up.

That should answer the “can he sing” question. If our imaginary beau, Harry Connick Jr, says someone is fricking great then we will take his word to be what our friend Deena calls “biblical truth”.

Update: We like Sam’s cover of John Mayer’s Your Body is a Wonderland more than his Ed Sheeran cover above. Check it out.

Question: Does Sam have a girlfriend? If none, we would like to recommend our friend Deena. Hehe.