Ryan Reynolds Leather Jacket: Blade Trinity. Let us check out some of Canadian hunk Ryan Reynold’s leather jackets and we begin with probably the most chic of them all: the brown one he wore on the 2004 movie Blade Trinity. Anyone know what brand the jacket is from? We’ve been trying to find out but remain as clueless as when we started. 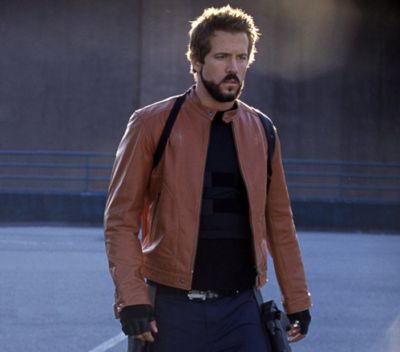 Ryan in his black leather and faded blue jeans. This pic reminds us of him as Berg in his TV show, Two Guys A Girl and a Pizza Place. He’s looking “devilish”, no? 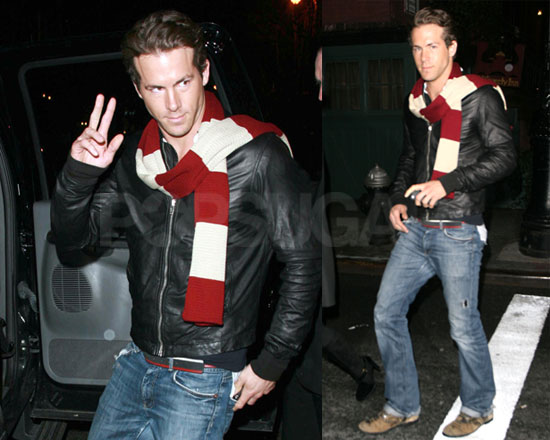 With a random girl. Okay, she’s not a random girl at all. We know she’s famous but we’re all about Ryan and his leather fashion so let’s leave her unidentified. 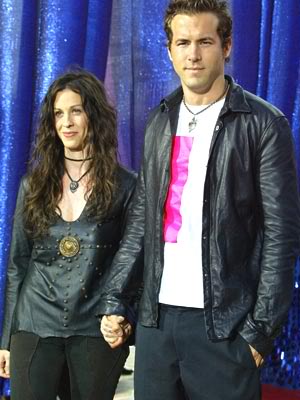 Is Ryan trying to “out-hair” Brad Pitt? We love his liquid leather jacket. 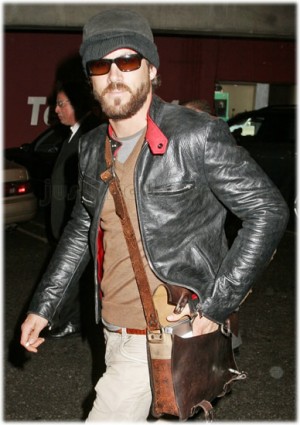 So do you have a favorite Ryan Reynolds leather jacket?

……
Ryan Reynolds Skinny Pants Fashion Style (23 September 2009). Ryan, Ryan, we love you. We think you’re cool. We love your muscles. We think you are a hunk (despite the Is Ryan Reynolds Gay question). We think ScarJo is lucky for having you as a husband. But please, please don’t wear that skinny pants again. Ever. Ever. It is so not flattering. It reduces your hunkiness by 10%. And it makes you look like an inverted triangle. Hmm, maybe like Toronto’s CN Tower too. Seriously. 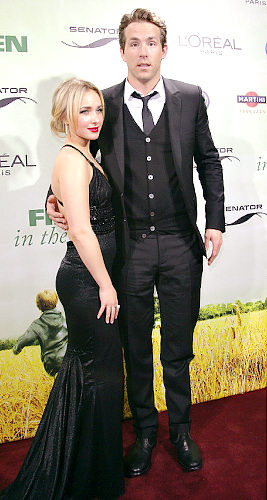 Anyhoo, maybe skinny pants/skinny jeans are not really for tall people, no? It works for vertically challenged guys like Zac Efron and the Jonas Brothers but maybe its not for tall guys like Ryan Reynolds.

…..
Green Lantern Movie Trailer – Fan Made (21 July 2009). Okay, this is not the official trailer for the upcoming Green Lantern movie starring Ryan Reynolds but a fan-made trailer starring Nathan Fillion. We give props to the fan who made this video because it’s really well done. Unfortunately, his/her hope of having Nathan get the role of Hal Jordan didn’t materialize.

Some info tidbit: Nathan and Ryan both starred in the sitcom, Two Guys, A Girl, and a Pizza Place which we watched in a marathon viewing that lasted for about two days. Update: Sorry, video deleted.

UPDATE: We went to watch the Green Lantern movie. It’s gotten really bad reviews and its a box office flop but we actually enjoyed it. Well, we enjoyed it because we wanted to enjoy it and because of Ryan Reynolds.

Everything bad about the movie – and we must admit that it’s not a good movie at all because the villain is a freaking nimbus clous – is the fault of the people behind the camera (the writers, the directors, and the producers) while everyone good about the movie should be credited to the actors such as Ryan and the other Green Lantern Guy.

Seriously, we don’t think Ryan should be blamed for this flop. Some people are trying to pin the blame on him and we don’t think that’s fair. Blame the director and the writers for their stinker of a movie.