Originally from Iowa, Ryan is starting to make a name for himself as a young actor and male model. In fact, he starred last year in the horror movie Children of the Corn which aired on the SyFy Network. 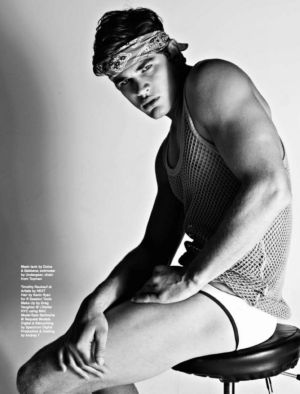 We are easily scared, so let’s not talk about Children of the Corn. Instead, let us appreciate Ryan’s gorgeousness particularly his perfectly sculpted six-pack in the next photo below. 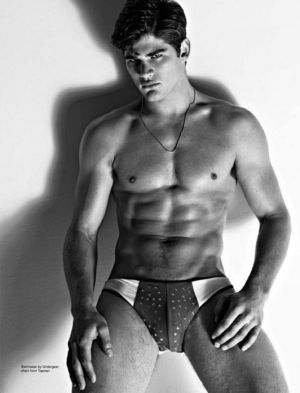 Our favorite Ryan pic is probably the one below where he starred in a print ad for Calvin Klein Underwear Holiday 2010. 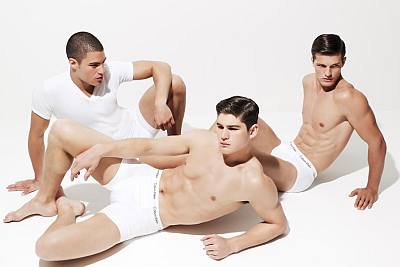 Who are the other guys in the photo? From what we gathered from the internets, their names are Diego Miguel and David Vega. Diego is from Brazil which, as you very well know, is the birthplace of many male and female supermodels. Aside from CK Holiday Underwear, he’s done ad campaigns for other top brands such as DSquared and Blanco Denims.

David on the other hand is … well, we can’t find much info about him so let’s call him a “mystery model”. Seems like this is the only ad campaign he’s done although he did some runway modeling in New York and Milan. Want more male underwear models?

But let’s go back to our Ryan because this post is about our Iowa hunk, right? Check him out looking cool and hawt in a pair of Frankie Morello briefs. He headlined the Frankie Morello SexyWear ad campaign for the brand’s Fall/Winter 2011-2012 season.

Ryan was also featured in an editorial called Trunk Show in the online edition of the paper of record aka The New York Times. Who knew yellow short shorts would look oh-so-good on a man?