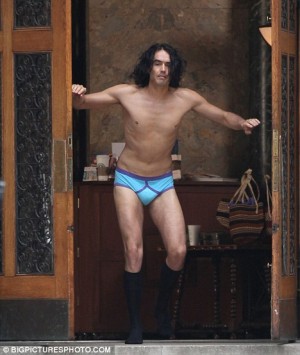 Now this is what a man looks like in his undies; he totally looks natural and very unlike those men with super enhanced underwear a-la Andrew Christian’s push-up briefs.

…..
More Russell Brand Underwear. We are updating this post for those of you Russell Brand fans who want to see more of his underwear. You, pervy, you! We suspect your perviness meter will go up when you see the baby that is Russell being washed by his nanny, The Dame Helen Mirren herself. She’s a dame, right? 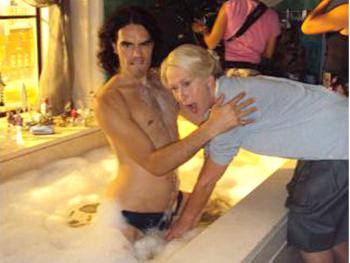 Before you think more dirty thoughts about these two, this pic is actually from the set of Arthur, the movie from where the first photos we published above were taken.

Aha, this ones for those of you who are looking for Russell Brand’s speedo swimsuit. You gotta give this British funnyman credit for looking great in his kinky women’s underwear. Glittering gold female undies, what’s not to like? Russell definitely belongs to our list of men who wear women’s underwear, no?

This is actually from a few year’s ago during the Little Britain Comic Relief at the Apollo theater. 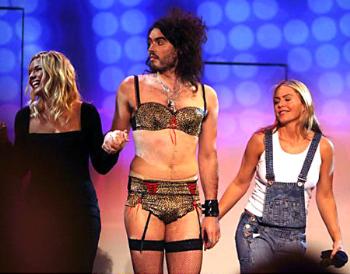 Katy Perry’s ex- husband does love him his Y-Front briefs, doesn’t he? 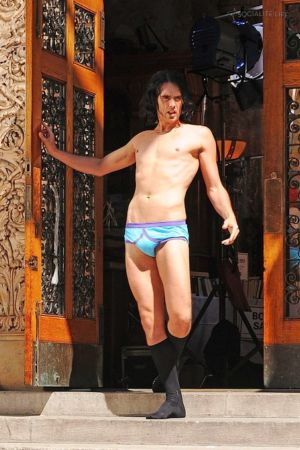 What did we say about Russell dropping his trousers at the drop of a hat? Here’s your Russell, showing the world his tighty whities. 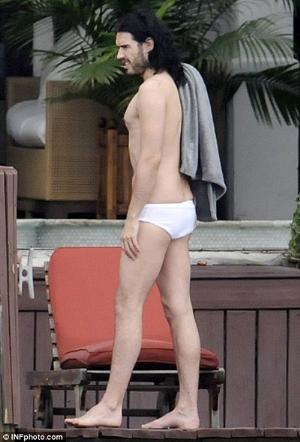 To be fair, this is actually from his upcoming movie Rock of Ages which is currently being shot in Miami. We’re guessing the director told him to walk around in his white briefs.