Looking for more famous men in their underwear? Well, here’s a funny and delicious photo of Welsh rugby player Aaron Bramwell. Are you glad, accidents like this happen in sports.

Anyhoo, for those of you wanting to know more about this Welsh hunk, here’s a news report about him receiving a Player of the Month Award in October 2008. We like him because he names Muhammad Ali as his idol. Hello, fellow Ali fan!

Did we read that right, £100? So there’s no big money involved with the award but it’s the honor that counts. And truth be told, between honor and money we’d pick the former every damn effin’ time.

Aaron reportedly sustained an injury a month ago but is now back in the game and is helping his team win against their rivals. He tells wru.co.uk:

“I was just pleased to be able to put some games together after being out through injury. I picked up a knee strain in the Neath game but I’m hoping to return at the end of November for our home encounter with League leaders Llanelli.

“I’m really grateful for being given an opportunity at Ebbw Vale, and I’m thankful that Patrick Horgan suggested a move from full back to centre, a position I’m really enjoying this season. There’s a great bunch of players at Ebbw Vale, and the coaching staff with Matthew McCarthy and Lyn Jones now involved create a really professional environment.

“We had some really good wins in October, especially over Cardiff at the Arms Park and over champions Neath, but we have to keep that momentum going now which is not going to be easy.”

And what does his coach say about Aaron’s play so far? Here’s Ebbw Vale coach Matthew McCarthy:

“Aaron is a young player who could still make the step up to the next level and play regional rugby, if he stays injury free. He took over the kicking duties for the Cardiff game and really helped to turn our early season form around. He has a physical presence in midfield and certainly deserves this accolade.”

Did we say we like him more because he admires Mohammad Ali? Yes we did. But it’s important for us to say it again. Hehe. More pics of Aaron Branwell below. 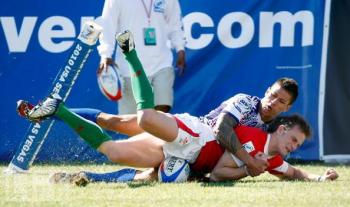 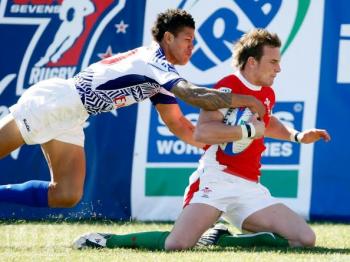 Update on Aaron’s rugby career: He now currently plays for Neath RFC in the Principality Premiership and is also a member of the Wales national rugby union team, Wales Sevens.