England captain Borthwick reveals that he had to put up with dressing room jokes since these photos were taken. But now, he says he’s pretty satisfied with the results. From stuff.co.nz:

“It is one of the most daring shoots I’ve been involved in but it has been loads of fun, even if it has given my team-mates plenty of ammunition for changing room banter,” he said.

Wondering how the Powerade print ads we posted earlier were made? This video gives us a behind-the-scenes look. As in the photos, this video features England rugby captain Steve Borthwick, Shane Williams, and Paul Sackey.

Update: Sorry, the video is either disabled or is no longer available. 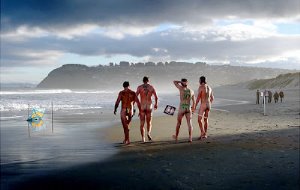 We can’t remember now where we “borrowed” this photo but the guys in the pictures are professional rugby players from Down Under. Hey, wait, we don’t actually know whether they are from Australia or from New Zealand. Is it correct to also refer to New Zealand as Down Under? Or is the “nickname” only reserved for Australia? If you happen to know, do tell in the comments.

Anyways, for no apparent reason, these professional sportsmen just decided to hold a n*k*ed rugby game.

We’re pretty sure their fans were beyond thrilled. [Update: Sorry, we had to delete the pics just because.]