Rohan Antao Freida Pinto: Jilted Ex, Speaks Out. Finally, Freida Pinto’s ex-fiance/husband Rohan Antao has broken his silence about their relationship. In an interview with the News of the World, he reveals the following:

On Slumdog Millionaire:
“I hate the film. It wrecked my relationship. As soon as it became a success and she started spending all her time with Dev, she ended it.”

On their relationship:
“We were from different groups but I thought she was stunning and we had so much in common. We spent all our time together, just the two of us. We were a modern couple, so we didn’t need a chaperone.”

“We were from different fields but our friendship and respect for each other made it special. We both agreed we wanted to spend our lives together. It was the happiest time of my life. Freida was lovely and I felt complete with her.

“If I’d had a busy day at work I would meet her and we’d hug. Her embrace was amazing and you could forget about all your worries. That’s what I loved about her the most. There’s more, but we’re private people and that’s between her and me.”

On their engagement:
“It was beautiful. We gave a speech about how we would love each other forever. Our families were happy for us. But we never spoke about when we would marry. We’d decided our careers would come first.”

On the change in their relationship:
“The film bosses didn’t want her to be engaged. It would affect the whole emphasis of the film, the love story. I had no say in it. But it was all too much too soon for her. She was staying in five-star hotels and being driven by chauffeurs—it was quite a change.

On Dev:
“And she was always with Dev, doing press publicity. They certainly did a brilliant job promoting a film about a couple in love! I knew there was chemistry between them, but she said she had no feelings towards him at that time.”

“I asked Freida to spend less time with Dev, but she refused. She was comfortable with him, and we were talking over the phone less and less. I was ticked off with Dev—and her. I feel bitter towards Dev. If you are engaged to someone, the last thing you want to be thinking about is whether Dev Patel is telling her how wonderful she is.”

On their break-up:
“She decided she didn’t want to be with me any more. She said she wanted us to be friends. But how can I be when she has destroyed my faith in love? She is infatuated with Dev. I don’t know if they were having a sexual relationship but if I came face to face with him I would have things to say.”

On letting go:
“This is a very hard time for me, because as much as I don’t want to let go, I have to. I wish her success in her career, but I can’t watch the Oscars, and I don’t want to watch the film—it wrecked our love.” 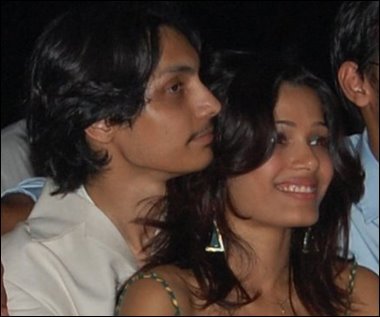 According to The Sun, these are Freida’s wedding photos when she secretly married then boyfriend Rohan Antao in 2007. 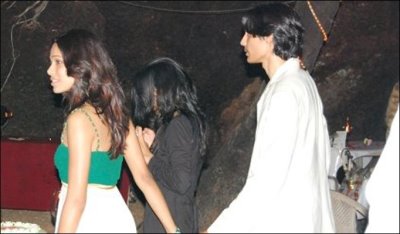 Hmmm. Things are getting curiouser and curiouser for Slumdog star Freida Pinto and dumped boyfriend Rohan Antao. According to the Times of India, the two actually got married in December 2007.

From a source who is reported to be a close friend of the former lovers:

“Rohan and Freida were extremely close and have several common friends. Both are 24 years old and were deeply in love with each other. They had decided that they would get married in Goa, which is Rohan’s hometown. They had booked a hotel for the wedding. Freida had given the designer just five days to make her gown as the wedding had to take place in late December 2007. Once the gown was almost ready, Freida also had a dress trial to which Rohan had accompanied her.”

“Rohan and Freida had decided to keep their marriage a secret till they felt ready to talk about it openly. Even though she has dumped her husband Rohan now, he is not the kind who will go out and speak against her. In fact, they were together even when she completed shooting for Slumdog Millionaire. But once the film started making waves internationally, she decided to dump Rohan,” added the source.

So are they officially divorced now? The friend said, “Nothing is clear as yet. Rohan is still in shock at being dumped. He changed his status in the networking site Facebook from ‘committed’ to ‘single’ earlier this month. In fact, Freida was unhappy when Rohan had earlier written ‘engaged’ in his relationship status on the site.” 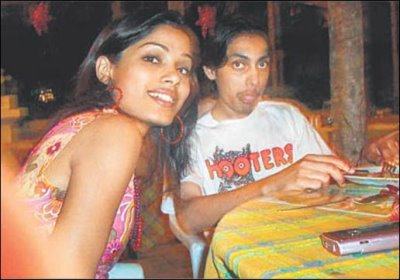 What do you do when you go way, way up the celebrity ladder? Well, if you’re Freida Pinto, the current Hollywood toast of the town, you would dump your fiance. The News of the World reports:

Slumdog Millionaire beauty Freida Pinto has ditched her fiancé because of her new-found fame, we can exclusively reveal.

Stunning Freida, 24, told gutted Mumbai PR agent Rohan Antao she could not be with him and be a world-renowned actress at the same time.

She had kept Rohan — her sweetheart from university — a secret from the media during her meteoric rise to stardom.

He has gone to ground since she told him it was over but pals say he is “devastated” at losing the girl he thought he was marrying. One close friend said: “It’s been a terrible time for him. One minute they were getting married, the next it was all over.” [News of the World]

Ugh. Ugh. We kinda feel for Rohan but we’re not surprised by Freida’s decision. Hollywood being what it is (your hotness in Hollywood lasts for less than 15 minutes), we hope that things will work out for Freida.