Robert Downey Jr Leather Jacket, Suit, Shoes Fashion Style. Now that we already blogged about Tony Stark’s sense of fashion, we should also check out the style of the man who plays him, the remarkable Robert Downey Jr. Men’s fashion bible, GQ Magazine, recently did a leather jacket-focused photospread on the 48-year-old American actor. Let’s see how our RDJ does as a “male model”, shall we? Haha. Is that a hair dryer? 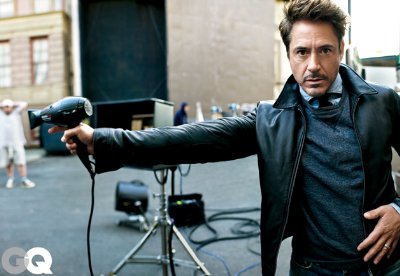 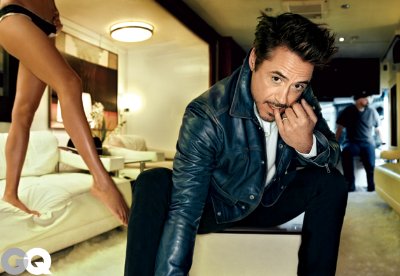 Why is he biting Iron Man’s head in our next photo? Weird, no? His leather jacket is from the Prada menswear collection. 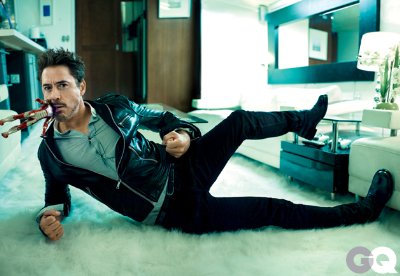 Now, the above outfits are technically not RDJ’s fashion choices since he’s made to wear them in the photoshoot so let’s check out what he actually wears outside of photoshoots and movies. What kind of shoes, suits, sunglasses, wristwatches does he like to wear, for instance? Well, when it comes to shoes, he apparently likes him some Nike. 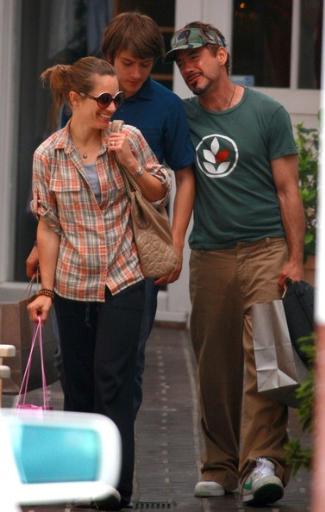 For those of you wondering, the other guys in the pic above are his wife, Susan Downey, and their son Indio who looks taller than his dad who reportedly stands at 1.74 m (5’8″). 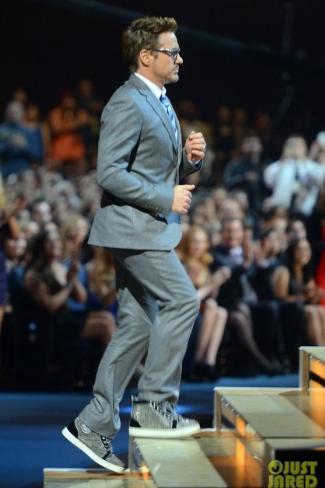 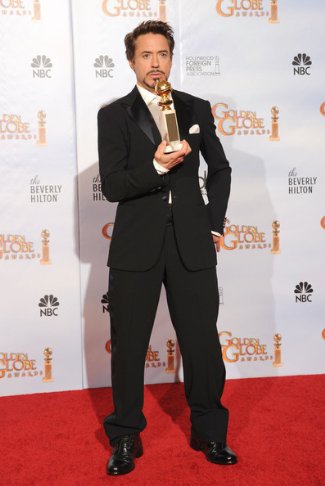 When it comes to suits, RDJ apparently loves, loves, loves him his Vivienne Westwood suits. 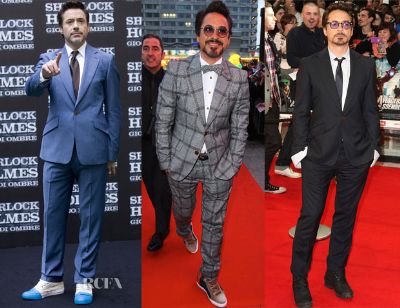 One of his favourite designers is Vivienne Westwood. I loved the cornflower-blue Westwood suit he wore to the ‘Sherlock Holmes: A Game of Shadows’ Rome photocall back in December last year, but I’m not too crazy about the white sneakers with the blue toe-caps.

During the promotional tour for ‘The Avengers’, he has worn a Vivienne Westwood suit twice so far.

For the Moscow premiere he looked very dapper in a grey plaid suit which he styled with a black-and-white check bow tie, a white dress shirt and Marc Jacobs beaded sneakers.

The actor appeared more serious on the red carpet for the London premiere, but his navy Vivienne Westwood suit was styled with a shirt with oversized cuffs and black sneakers.

He was also spotted wearing this Calvin Klein suit during an Iron Man III premiere. 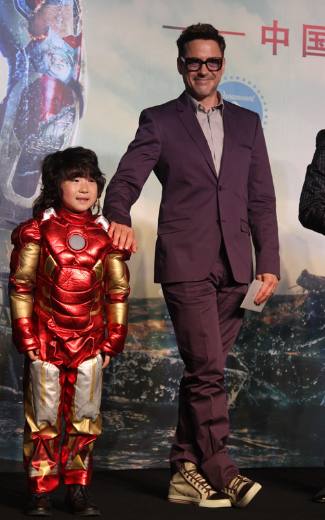 That’s it for now, fellow Famewatchers. Don’t forget to check out our post on Tony Stark’s Iron Man Leather Jacket.