Ricky Martin Underwear Update (22 May 2017). We are updating this post to give you some of the latest Ricky Martin underwear sightings. Here’s our singing hunk enjoying the view in some balcony in his boxer shorts. He really is a boxers guy, no? We still have to see him in a pair of briefs although he does wear briefs-style Speedos. 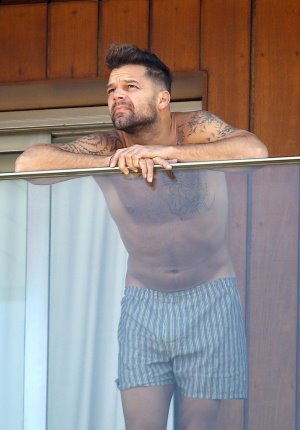 Last April, our Ricky danced and and sang in a pair of white boxer briefs when he made a recent appearance on the show Lip Sync Battle. As you may have expected, he recreated the iconic Tom Cruise sing and dance on the movie Risky Business. 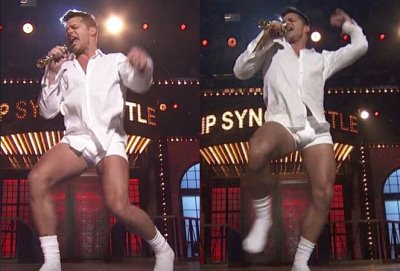 Ricky Martin Underwear: Boxers or Briefs. Here’s the answer to those of you who are wondering whether Latino hunk Ricky Martin is a briefs underwear guy or a boxers underwear guy. However, take note that this picture was taken when he was much younger so his underwear preferences may have changed over time. Want more male celebrity underwear? 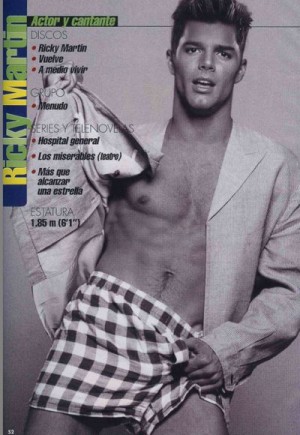 Update: What brand of underwear does our hunk daddy prefer? Here’s Ricky in sexy white trousers with his Calvin Klein underwear peeking up his pants. 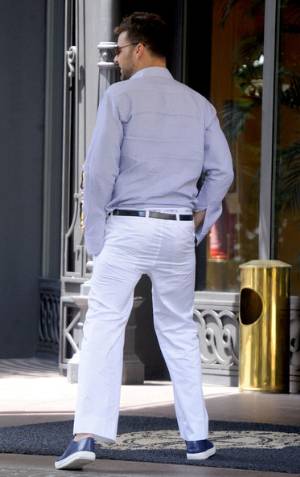 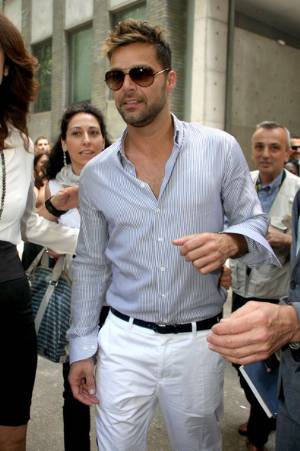 Do you find it weird that the lettering is upside down? 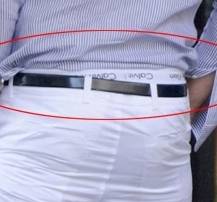 By the way, some folks are speculating that Ricky is wearing a CK thong underwear because you can’t see any brief lines or boxers through his pants. We kinda agree with them, as we said somewhere in this site, white-colored pants tend to be more revealing or more “transparent” compared to non-white outfits. [Check out, for instance these men’s see-through pants which are mostly white.] We’d be seeing brief lines if he’s wearing a pair of briefs or we’d be seeing his boxer shorts if he’s wearing one. But we don’t see those so its likely that he is wearing a thong.

Ricky Martin is trying to copy what that statue is doing. He should have imitated it 100% and got rid of that black Speedo altogether. Want more of Ricky Martin? Check out our post about Ricky parenting his twin kids. Looks like he’s an awesome dad who enjoys being a father. Also, you might want to read our post asking the “Is Ricky Martin Gay” question that a lot of people often wonder about. [Update: It turns out that we are right on that one.]

Of course, you want more Speedo swimsuit pictures of this Latino hottie, don’t you?

This is where we imagine that he’s not wearing anything at all. 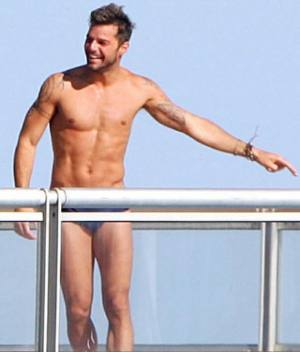 Is he wearing pajama shorts? We give you the picture, you decide! 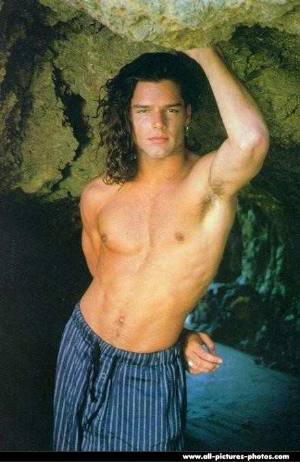