Ricky Gervais Underwear. What brand of underwear does British comic Ricky Gervais prefer to wear? Well, if his recent guesting on The Ellen Degeneres Show is an indication, our Ricky loves him his Tickle Me Elmo underwear. Really Ricky, Tickle Me Elmo? You should have opted for this Cristiano Ronaldo Armani underwear.

Anyhoo, here’s Ricky showing off his Tickle Me Elmo underwear to Ellen. And the rest of the world, of course. 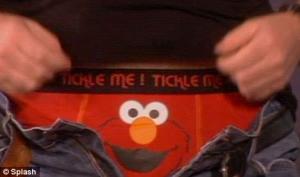 Are Ricky and Ellen playing the “Show Me Yours and I’ll Show You Mine” game? If so, then Ellen should have shown hers as well. 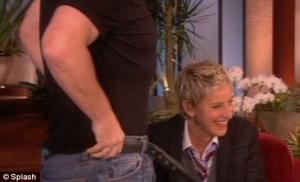 Question: Do you think Ricky is sending a message with his underwear brand preference? Maybe he wants to be tickled down there? Also, maybe he wants a certain Elmo to do the tickling? Hehe. Just asking, Ricky! Also, we don’t judge because tickling is sooo much fun. 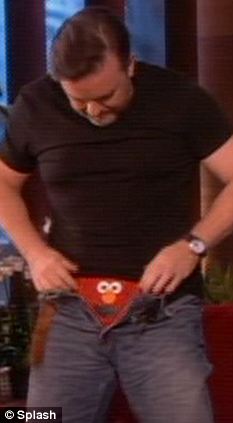 Ricky Gervais Underwear: Boxers or Briefs? Now that we know Ricky’s underwear brand preference, what cut or style does he like to wear? Does he like boxers or briefs? If the next photo below is an indicator, Ricky is a boxer briefs guy.

As in the preceding photos, looks like we also have Ellen to thank for Ricky’s metallic gold underwear. Our Ricky is in pretty good shape in the pic above, no?

UPDATE: Looks like, Ricky Gervais isn’t the only grown-up man who loves him his Tickle Me Elmo. For instance, here’s a college dude at the UCLA Underwear Run last 2009. He loves his Elmo doll so much he attached it to his briefs. 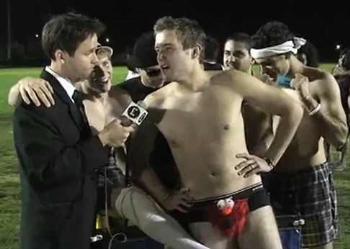 Cool or silly? Then again, who says it can’t be both cool and silly? We think it’s more cool than silly though. After all, you gotta be cool like Ricky to pull off wearing a cartoon character underwear.