Ricky Berens’s Swimsuit Cracks, Shows Crack. Ricky Berens’ experience should be a sufficient enough reason for swimming officials to ban these atrocious looking bodysuits. Swimmers should go back to wearing those sexy Speedo swim trunks. With swimming trunks, nothing like this will happen. What do you think? 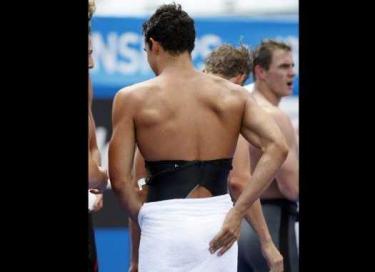 Says Ricky of his experience: “I kind of freaked out for just a second. I felt like (the hole) was almost down to my knees. I felt like I was putting on a pretty good show.”

It was a pretty good show indeed, Ricky :-) 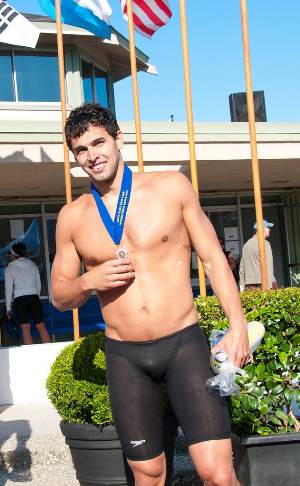 Want to see what Ricky looks like from the front? Here’s a recent photo of the American swimmer we grabbed from flickr courtesy of jdlasica. By the way, we forgot to mention in our original post that Ricky is an Olympic gold medalist having won a gold from the 4×200 m freestyle event at the 2008 Beijing Olympic Games.

Remains to be seen, no? Want more hot American men? Or would you rather check out these male Olympic swimmers?