Push-up Men’s Underwear: Roland Lodoli, Croatian Label (posted 4 January 2010). Guys, want to enhance your manhood without having to go through the penile enhancement surgery thingie? Well, well, well, then you should check out this push-up underwear by Croatian designer Roland Lodoli. 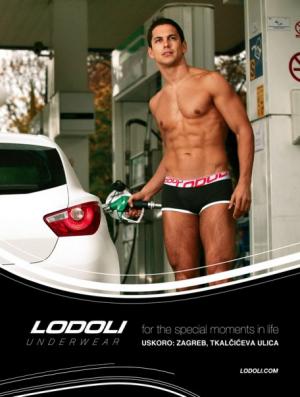 Lodoli actually released this design last year (ahead of Andrew Christian’s shock jock briefs) and it was a best-seller in his native Croatia.

THESE push-up pants are designed to make the most of modest manhoods. Similar in design to the Wonderbra, the briefs have a special pocket inside that thrusts the contents up and out. Designer Roland Lodoli said they have been flying off the shelves since he launched them at his shop in Zagreb, Croatia.

He said: “Now I’m working on some swimwear for men for the summer so they never have to feel ashamed on the beach again — no matter how cold the water.”

We’re pretty sure a lot of men are looking forward to that enhanced swimwear. 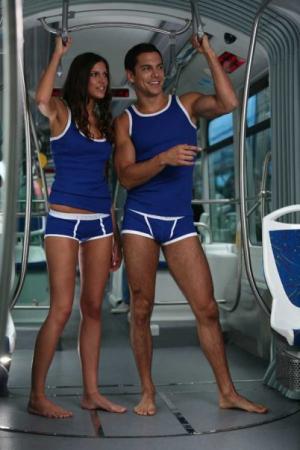 These models sure are exercising their god-given right to wear their underwear as outerwear, no? 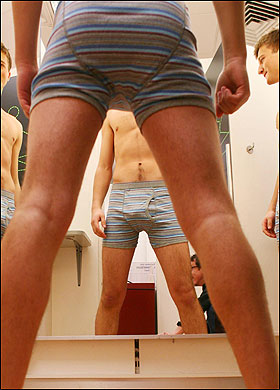 Wanna see what designer Roland Rodoli looks like? Here’s a picture of him in front of his most important creations, his underwear line. 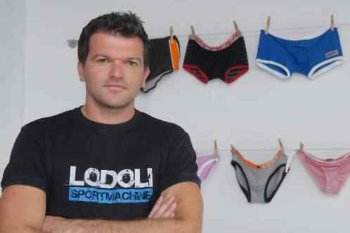 The Lodoli underwear brand has reportedly found an international market thanks to the internet. So its not just Croatian guys who are getting themselves a more impressive “frontage” but guys from America, Asia, and other parts of Europe as well.

Here’s a BBC interview (translated from Brazilian/Portuguese) where Lodoli talks about how he decided to design men’s underwear.

BBC Trends: How did the idea for underwear?
Lodoli: When I go shopping with my girlfriend, I see the variety of women’s underwear. For men, there is not much choice, just black and white, and thus was born the idea of ​​creating my brand, Lodoli Underwear. We create shorts in various colors and models.

BBC Trends: How does the underwear that increases the volume of the boys?
Lodoli: It has a simple principle, a pocket sewn inside his shorts to the testes.

BBC Trends: And she’s comfortable?
Lodoli: Very comfortable because they do not have any kind of wire or filler.

BBC Trends: What has been the reaction from people?
Lodoli: The response has been phenomenal. When they learn of underwear for the first time, people laugh. But both men and women have purchased. For now the products are only on sale in two stores in Zagreb, but will be available soon on my website .

Transparent boxer shorts? That’s kind of interesting but we’re not sure if we want one for ourselves.