Peter Campion, Hot Priest on Derry Girls: Shirtless, Girlfriend, Family. Here’s a question for you fellow Famewatchers: Did you, like all the girls on Derry Girls, swoon when Father Peter appeared on the screen? Of course, you did. Everyone did! Even James, the straight wee lad from England did. Closer to home, even our Grandma Akita — who’s always telling us to tone down our thirstiness and to stop blogging about male celebrities in their skimpy underwear — went, “Oh heavenly father in heaven, that’s a beautiful priest.”

Beautiful indeed, he is. For those of you wondering, the hot priest of Derry is played by Irish actor Peter Campion. Unfortunately for us, it seems like he made the wise decision to stay off social media. However, he’s got some dedicated fans who post photos of him like this one we grabbed from Twitter. 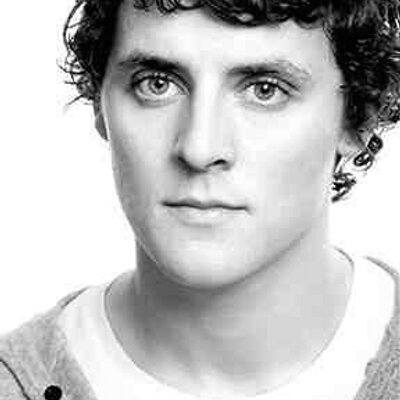 We actually like it better when his hair is curly like this and not overly pampered by the hairdresser who broke his heart on the show.

Peter Campion Shirtless Photos. This one’s for the thirsty among us who want to see more of Peter. The image is from the Oscar-nominated movie Brooklyn which you should go watch if you want to see more shirtless Peter (we think anyways). Photo shows him with fellow actors Saoirse Ronan, Domhnall Gleeson, and Eileen O’ Higgins. Want more shirtless actors from Derry Girls? Check out our post on Dylan Llewellyn who plays the wee English lad. 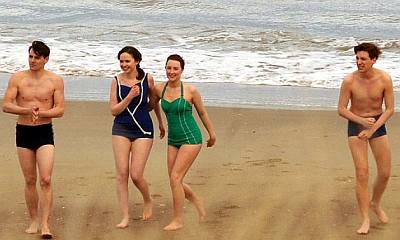 Peter Campion Gay or Straight? Does He Have a Girlfriend? He is straight and he does have a girlfriend who is also on the biz. A 2018 article by the Irish Examiner tells us more about Peter’s relationship status:

He lives in the capital with his girlfriend, Red Rock actress Valerie O’Connor, and their daughter Mary Rae, who’s a year-and-a-half old. Fatherhood has changed him hugely, he says: “It’s a whole different ball game. It’s the only time in life that there’s this real ‘before and after’. It’s incredible, and discombobulating, and the love is just endless.” 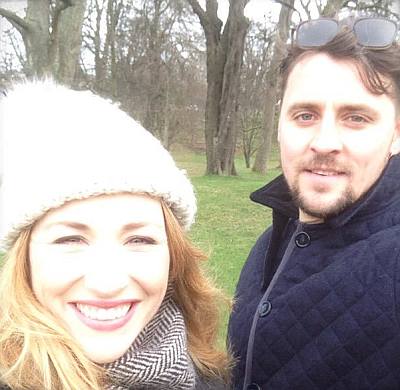 Now, that’s a happy and lovely couple! In closing, we’ll leave you another photo of Father Peter: 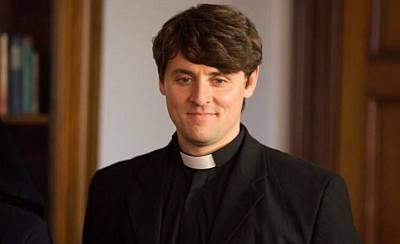