Pete Seeger Obama Inauguration: This Land is Your Land. Here’s another video of Pete Seeger. This time it’s his performance during the pre-Obama inauguration fest going on in Washington DC. I love me my Pete Seeger. He’s amazing and its great to see him perform for a bigger audience. Let’s sing along with him. After the disastrous Bush years, crying is acceptable too.

Update: Darn, HBO keeps on having the videos deleted for copyright reasons. We will embed a new video once we find one later. For the time being here are photos of Peter Seeger and Bruce Springsteen at the Obama inauguration. 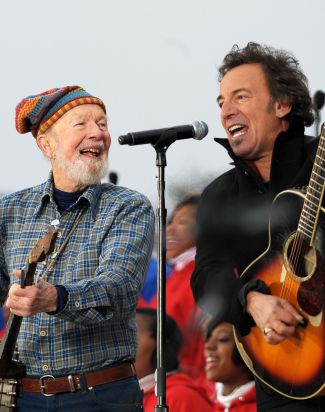 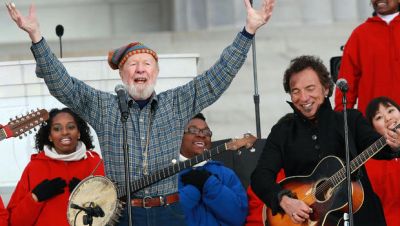 Update: Here’s a new video of Pete and Bruce’s performance.

A video of one of my heroes, Pete Seeger, singing one of my favorite songs, “Little Boxes”. He is a great American hero for social justice and I’m glad he’s taking part in the Obama inauguration. Go, Pete! Love yah! Keep on singing.

As Pete Seeger groupies, we here at Famewatcher are thrilled to read this news about the San Diego school district apologizing to Pete. It took them 49 years to apologize but it’s better late than never. Go, Pete.

Background: It was the age of McCarthyism and the silly folks at the San Diego school board wouldn’t allow Pete to hold a concert at the Hoover High School unless he signs an oath against communism. He refused to sign the stupid oath but a sensible judge allowed him to proceed with his concert anyway.

The Associated Press reports: “In a resolution approved Tuesday night, the school district declared that the board “deeply regrets its predecessors’ actions” and offered an apology to a man who has become “one of our dearest national treasures.””

The report adds: “Now, the 89-year-old songwriter appears willing to accept the board’s apology, saying the board’s resolution is a ‘measure of justice that our right to freedom of expression has been vindicated’. He also quipped that the board’s demand for the oath in 1960 may have helped his career.”

Says Pete of his experience: “This was the contradiction the poor blacklisters faced: The more they tried to target me the more they drummed up publicity for my concerts. I like to misquote Thomas Jefferson in saying, ‘The price of liberty is eternal publicity.’ It’s worth remembering how hysterical people felt back then.”

Blacklisting Pete was a dickish move on the part of the school board. Thank heavens it has seen the light.

This video was not aired by HBO maybe because it ran out of airtime or maybe because the HBO powers-that-be didn’t want to show the bishop who has become the center of controversy mainly because he’s gay. It’s a sad day in the world when TV producers ignore a bishop’s prayer because he’s gay, no?