Patrick Bolton Underwear, Shirtless, Gay or Girlfriend? So, fellow Famewatchers, have you found an imaginary boyfriend yet among the current Survivor cast? We initially thought ours would be JP Hilsabeck but he may already married (to a fellow hunky fireman) so we decided to set our eyes on the crazy redhead that is Patrick Bolton. And why not? He’s fun, he’s purty, and he looks like a Kennedy.

Anyhoo, here are some Patrick Bolton underwear photos for those of you fellow Survivor Famewatchers who are into guys who were their underwear as outerwear. Haha. (Photos courtesy of cbs.com). 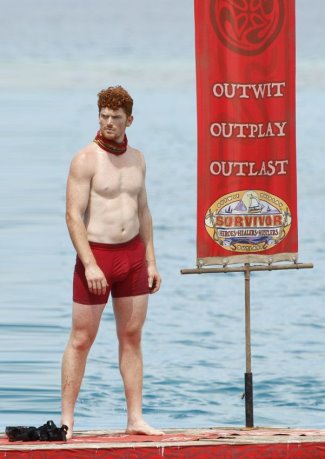 Who says you can’t go about throwing stuff while wearing nothing but your boxer briefs?

The next photo below is so gay. 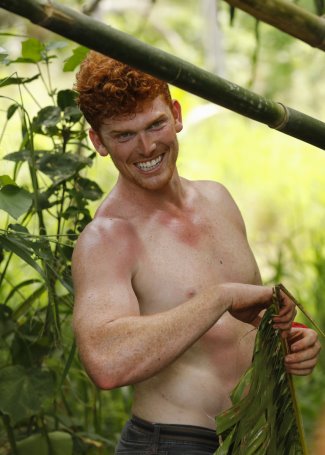 Come to think of it, the next pic below is kinda gay too. Right? Pink shirt, preference for bananas, and a pose that says “bump me”. We are joking, okay? Send no death threats. Haha. 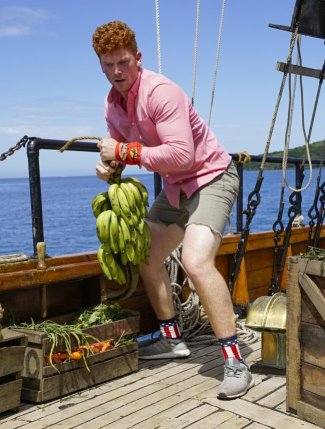 Is Patrick Bolton gay or straight? Despite the above gayish photos, we think he is as straight as an arrow. Does he have a wife or girlfriend? He does not have a wife, at the moment, that’s for sure. However, we do not know if he’s got a girlfriend. We hope he’s single because we want to keep crushing on him. Here’s our favorite photo of our Survivor redhead. 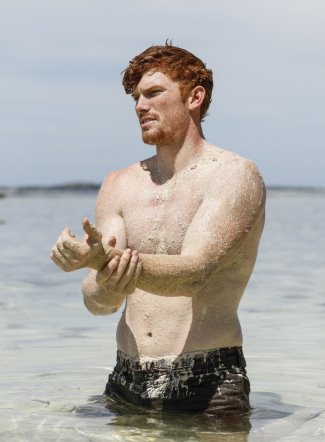 Damn, ain’t he fine! We hope he doesn’t get burned under the Fijian sun though.

Let’s end this post with what his fellow Survivor castaways are saying about our Patrick, shall we?

Desi Williams (on Patrick Bolton via The Hollywood Reporter): He’s a knucklehead. He’s just a knucklehead, through and through. I assume he’s from Texas. He wore this Longhorn shirt yesterday and we were sitting, waiting to come do these interviews, and there was a nest in a tree and everybody else just leaves it alone, because it’s obviously a nest. And he takes a big stick and starts knocking it out of the tree. Why would you do that? Because you’re a knucklehead. So I think he’s going to need some babysitting, or just needs to go home, because if he’s going to be knocking nests, that’s going to be an issue for me.

Roark Luskin (on Patrick Bolton via The Hollywood Reporter): He is reading a book that is essentially the modern version of “How to Win Friends and Influence People.” So, if he is trying to acquire those skills, in the next three days or for the past three days, whatever it’s been, then maybe this is somebody that I want on my team, because maybe he doesn’t know what’s going on. So, we’ll see. I want to get to know him for sure.

Nice to know he’s reading “How to Win Friends”, that would put our Patty in the same league as one of our favorite Survivors ever aka Chaos Kass.