Parry Glasspool Gay in Real Life, Girlfriend, Shirtless and Underwear Photos. Today in male celebrity underwear, we bring you Hollyoaks hunk Parry Glasspool and his briefs underwear. As you can see in these photos, our gorgeous British cutie is a briefs kind of guy rather than a boxers dude. [Update: Sorry, we had to delete some photos referred to in this post.] 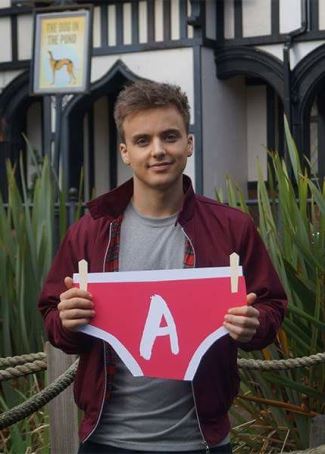 If you are wondering about why you are not very familiar with this hunk, it’s because he is actually fairly new in the entertainment biz. In fact, he only started acting in 2013 and got his major TV gig two years later as Harry Thompson on the Channel 4 series Hollyoaks. Playing a gay character, our Parry gets intimate with another beautiful dude, Ste Hay (played by Kieron Richardson). Here’s Harry and Ste making out:

Is Parry Glasspool Gay in Real Life? What about Kieron Richardson? We do not know. And the denizens at gay-or-straight.com appear to be clueless either. If we have to guess, we’re gonna say that both guys are straight who are very good in playing their roles. At this time, we also do not know whether Parry has a girlfriend or in a relationship.

Some Parry Glasspool Quotes. We are ending this post with some quotes from Parry we came across in his interviews:

On his gay fans: They’re quite vocal on Twitter which is always good. They’re the people who appreciate your work, whether it be acting or being on a cover.

On getting nominated as best newcomer on the National Television Awards: Oh, it does mean the world to me. It’s something that I think elevates you and something you can always have on your CV. An NTA is such a great accolade even if you don’t win it. You’re up there in front of all these important people. I’m just excited as I didn’t see it coming at all.

On how he got his foot in the industry: It was lucky I got an agent in the third year, half way through. There’s a site called Casting Call Pro and they randomly found me, which doesn’t happen very often at all

On his life as an actor: When you find yourself moaning, you have got to slap yourself and say ‘no, I’m doing what I love and I’m getting paid for it, which is what 98 per cent of other actors aren’t doing right now or would love to be in my position’.

Okay, that’s it for now. Let us end this post with a photo of our Parry looking gorgeous in a suit.