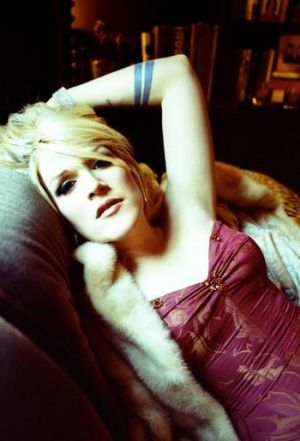 Says a gossipy source: “Daniel is fascinated by the drag culture and is always asking questions. He went to a few shows and was made to feel very welcome. He’s a lovely guy and he and Our Lady J got on like a house on fire. They have eaten out together and been to parties. They have become quite close.”

UPDATE: A video of Our Lady J singing her own composition, Trouble. She could be a better singer than the overrated and overpraised Danny Gokey, no? SORRY VIDEO NO LONGER AVAILABLE.

Daniel Radcliffe Admits He is a F*g Hag (posted 27 January 2009). Okay, okay, it seems like all we’ve done recently is blog about Daniel Radcliffe but his Daily Beast interview is full of quotable quotes so how can we not blog about it. Take this one for instance where he admits that he is a fag hag: “Forgive me, but to be politically incorrect here, I’ve seldom met a straight actor who is not a “f*g hag.” Are you?”

More from Daniel about being a f*g hag: “Oh, yeah. I know I definitely caught it. Absolutely. My mom was a casting director and my dad was a literary agent and I was surrounded by gay men from a very young age. And I was the only boy in my class at school who had that kind of relationship with gay men.”

Daniel adds: “Most of my friends had parents who had proper jobs in banks and law firms so none of them had been exposed to homosexuality in the way I had—as a normal course of things. So they had a rather different attitude toward it than I.”

And here’s an OMG video of our boy dancing during the Gypsy of the Year contest with a chorus line of horses from Equus. It is so funny and so gay. Upate: Video no longer available.