If the quoted portion above sounds like a poem, it’s because it is actually from a poem by American poet Nathaniel Parker Willis. He was friends with Edgar Allan Poe and was reportedly the highest paid magazine writer of his time.

Speaking of pleasant sights that salute the eye, what do you think of the stunningly beautiful French hunk that is Olivier Martinez? Check him out when he was younger. We say gorgeous, gorgeous, and gorgeous. 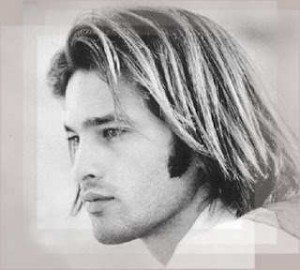 This French hottie first came to our and Hollywood’s attention when he was cast as Diane Lane’s lover in the 2002 movie Unfaithful but, before that, he was Javier Bardem’s lover in Before Night Falls (a film about the life of Cuban poet/novelist Reinaldo Arenas and which had the delightful cameo role for Johnny Depp as a transexual). In real life, Olivier is currently making beautiful music with Academy Award-winning actress Halle Berry.

Olivier Martinez Underwear. Check out Olivier in his Speedo briefs in these still photos from Before Night Falls. [Want more men in Speedo? Go see David Beckham and other dudes in White Speedo Swimwear for Men.] 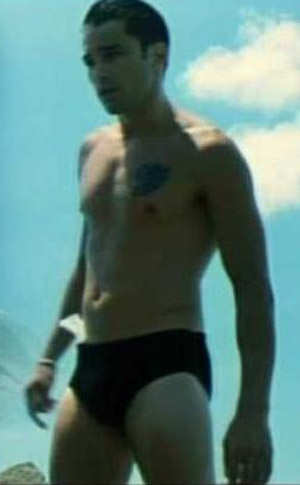 Olivier Martinez Gay or Straight? He is gay in Before Night Falls but he is straight in real life.

Olivier and Javier sitting on a tree. Okay, there’s really no tree in them images but you know what we mean, right? Hehe. 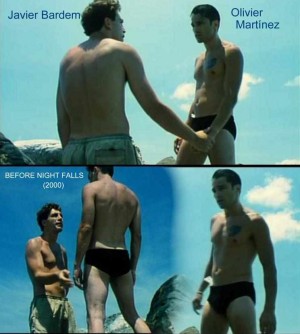 Question for fellow Famewatchers: Would you commit adultery, like Diane Lane’s character in Unfaithful, if the guy is as gorgeous and charming as Olivier Martinez? What about if the guy is Olivier himself. Not that it will happen but stranger things have happened, right?

For more on Olivier, you might want to check out some of his modeling photos in our earlier post: French Guy in Leather.