Odell Beckham Gay or Straight and Other Stuff. A 23-year-old young football player sure is making his presence felt in the NFL and the media is singing him praises for his badass footballing skills. He is fast becoming a celebrity and, true to form when it comes to famous guys, his haters are calling him gay while gossips (like us Famewatchers admittedly) are wondering whether he is. Hehe. Welcome to the world of famous guys, Odell!

Anyhoo, before we go try to answer the “is he gay” stuff, let’s check out what people are saying about the talents and skills of Odell Beckham who’s been described by Manish Mehta of the NY Daily News as a “Giants superstar”. Let’s start with Newsday:

The dynamic offense that the Giants were supposed to have this season is turning into a one-man show. And no one seems to mind.

Odell Beckham Jr. has been the target of exactly one third of the team’s passes in the last three games (47 of 141) and in Sunday’s loss to Washington he was targeted 18 times on 51 pass attempts (more than 35 percent). Against the Jets on Sunday — with or without Darrelle Revis on the field — expect those numbers to be similar.

“I think it’s you want the ball in the hands of the guys who can be the most productive,” Tom Coughlin said of the slanted rationing.

The problem is, there are no productive “guys” in the Giants’ offense. Just a guy. Singular. 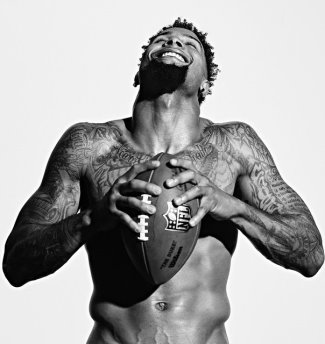 This is becoming routine for Odell Beckham Jr., but you still have to stop and enjoy it.

The New York Giants wide receiver has dazzled the NFL with acrobatic catches since he came into the league as a rookie last season. Watching him warm up before the game has even become a must-see event as he dazzles with an array of one-handed catches. 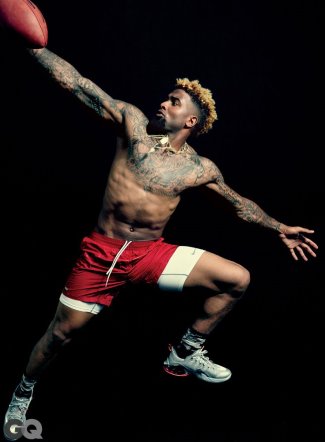 And here’s what NFL players are saying about the kid’s mad catching skills. Quotes via the NY Post:

OT Trent Williams: That wasn’t human. I was speechless. The guy is not from this world.

CB Will Blackmon: I’m like, “Great, now I’m going to be on NFL Films highlights forever”.

DT Jason Hatcher: That was an awesome play. That guy’s special. God don’t make many like him. I think he might be the only one out there like that. He’s just a special guy. He works at his craft, so you have to take your hat off to a guy like that who can catch the ball like that. I think my son loves Odell Beckham more than he does me so I guess I’m going to have to go out and learn how to make catches like he does. 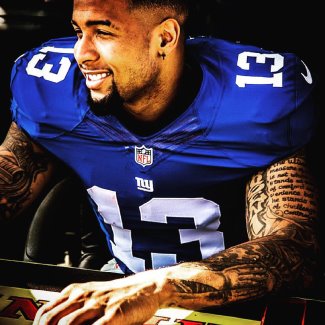 Shirtless workout is the way to go! 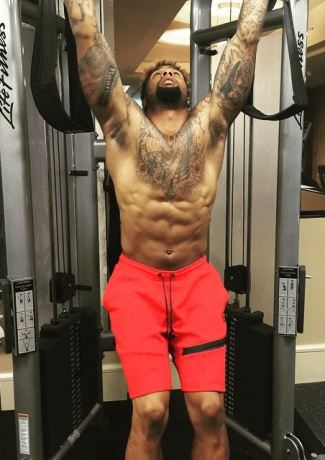 Relaxing and chilling and texting. 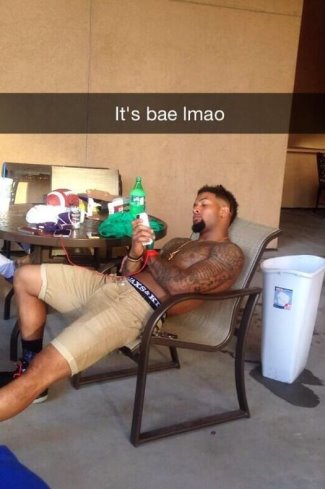 Look at them washboard abs! Deena says: Drop the towel next time, Odell.

Apparently, he loves him his Polo Ralph Lauren underwear. 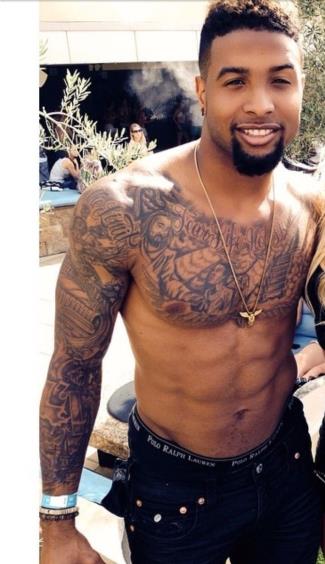 Odell Beckham Gay or Straight? He is straight but there are lots and lots of internet rumors out that that he is gay (or maybe bi). Take those rumors with a grain of salt because its the kind that crops up when guys rise the ladder from being known, to being famous, to being super-famous.

Odell Beckham Girlfriend? If TMZ and its sources is to be believed, Odell is reportedly dating Amber Rose.

From TMZ: “Sources connected to the couple tell us … Beckham began pursuing Rose a few months ago — and they met through a mutual friend. Since then, they’ve been texting and talking like crazy — and even went out on a few dates … including a romantic dinner to TAO restaurant in NYC last month.”

So there you have it, this report should give you an answer to the “is Odell Beckham gay or straight” that some of you are wondering about, no?