Nicolas Cage Plastic Surgery. Not unexpectedly, them guys at TMZ are asking their “Good genes or good docs” question for Nicolas Cage. We’re gonna guess that he has had good docs or good cosmetic surgeons who made his face free from the facial wrinkles that should naturally come with age. So its either Nicolas had a face lift to keep him looking like he was in the 1980s. 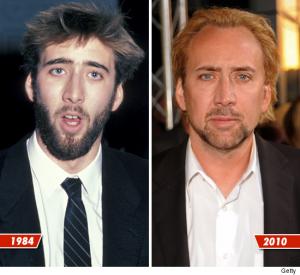 Or maybe he’s following Mark Spitz’s botox for men suggestion to keep them wrinkles at bay.

…..
Makemeheal, a website that tracks celebrity plastic surgeries, quotes a plastic surgeon named Dr. David Shafer who also believes that Nicolas Cage didn’t have any botox surgeries (at least not before 2009 when he was quoted):

“Nicolas Cage’s most recent photos do not look much different to me than his images in previous years. He does not have a ‘Botox Look’.”

Still, just because didn’t have botox does not mean that he didn’t have any cosmetic surgery enhancements. In fact, a rhinoplasty specialist named Paul Nassif believes that our Nicolas may have had a nose job years ago: “Nicolas Cage may have had a rhinoplasty a long time ago, as his nose appears to be a little pinched. He could also benefit from hair transplant surgery or a better hairpiece.”

Yeah, Nicolas does look like he needs to have some hair improvement work. If he opts to have one, we will include him to our illustrious list of famous men who have had Celebrity Hair Transplants. Maybe he had one already? His hair sure looks good in the pic below. 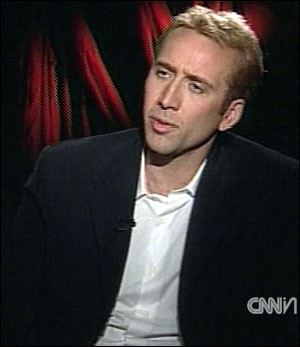 Now, whether Nicolas really had some cosmetic surgeries or hair transplants are still up for speculation. It’s clear though that he had some dental work done which really improved his looks. Check out these before and after dental work photos of the Oscar winning actor. 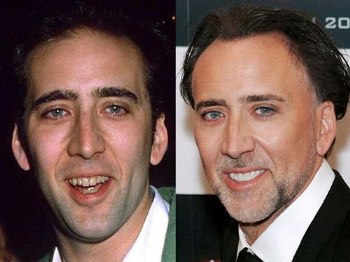