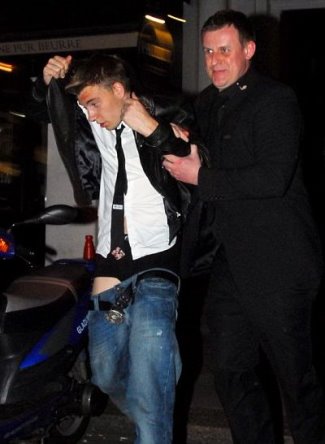 ‘Nicklas was with a group of friends inside the club, and just seemed to want to wind down after his match. But for some reason, his belt was undone as he left at 4am and his pants started to slip. He was trying to grab them to pull them up, but one of the bouncers was more concerned about getting him into his car, so virtually dragged him in despite his struggles.’

Nicklas Bendtner Shirtless on the Pitch (07 May 2009). Isn’t Nicklas Bendtner cool? He’s got pink shoes, he wears Emporio Armani undies, he’s got a cool-looking tattoo, and he’s from Denmark. 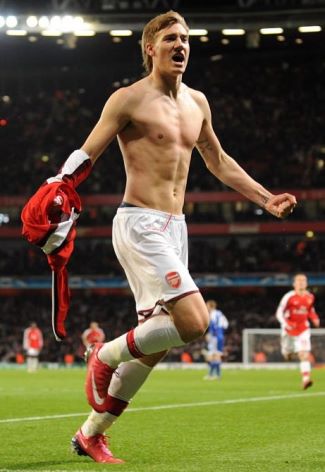 What’s not to like? Oh, and he’s also man enough to apologize.

From a statement issued by Nicklas after he was caught with his pants down which you can see in our first post:

“I love this club and was so disappointed to lose against Manchester United last night. Reaching a Champions League final is one of my biggest dreams and getting knocked out was a massive blow. However, no matter how disappointed I was, it does not excuse my behaviour later in the evening.

“I may be young, but my actions were a poor error of judgment and something I deeply regret. I want to apologize to the club and the fans for letting them and myself down. I cannot change the past, but will learn from my mistakes.” 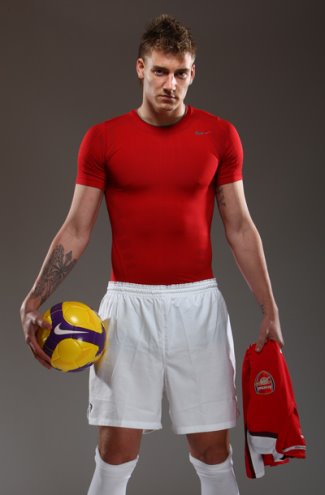 Nicklas Bendtner Underwear Scandal Update (published: 09 June 2011). Is there any footballer out there who can beat our Nicklas in the art of “removing ones pants to show one’s underwear”? We doubt if there’s any. 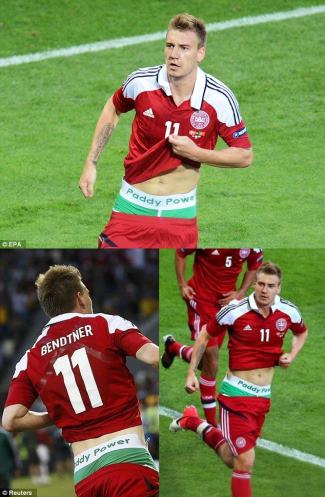 He’s now in trouble for dropping his football shorts to show his underwear which advertises Paddy Power. Pretty good stealth advertising for Paddy Power. We’re not sure it is good for our Nicklas.