It’s fun fun fun time in GayLandia with famous gay couples getting engaged and getting hitched. Who got engaged? Why, tennis great Martina Navratilova and Julia Lemigova of course. And who got hitched? Our favorite gay couple, Neil Patrick Harris and David Burtka, of course.

Here are two wedding photos from the Harris-Burtka wedding: During the wedding ceremony when they were saying their “I dos”. 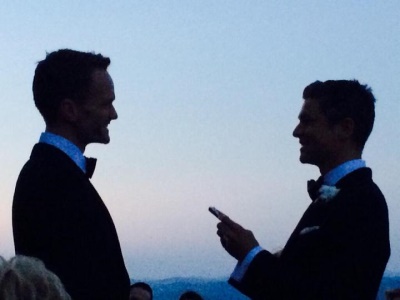 With their twin kids, Harper Grace and Gideon Scott: 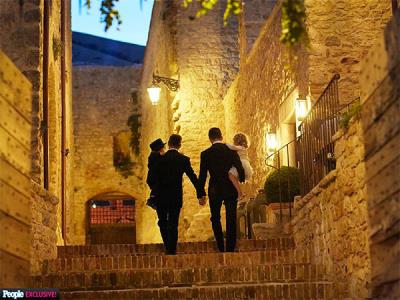 Neil Patrick Harris David Burtka Wedding Details. Neil and David had their super-secret wedding in Italy. Details are hard to come by because the newlyweds are classy people who didn’t go out publicizing their nuptials unlike, say, the trashy couple known as K.K. and K.W.

Thankfully, TV host Kelly Ripa was present during the wedding and shared some details on her show. From US Weekly:

“I spent the weekend, in Italy,” Ripa, 43, told her co-host Michael Strahan. “I went to a destination wedding… the wedding of Neil Patrick Harris and his partner David Burtka,” she continued as the room erupted into cheers. “They got married, yes!”

Ripa described the nuptials as a “very quiet, very private, family affair.” She joked, “I’m probably not even supposed to talk about it,” though adding that she received approval from one of the grooms. “Neil said I could talk about it,” Ripa added.

“It was a beautiful family affair in Perugia, Italy. They rented a castle — or I think they rented it. I hope we didn’t break into a castle and just stayed there,” Ripa recalled. “Sir Elton John performed. There were fireworks. The food was amazing. There were magic tricks, because, you know Neil is way into magic. Their wedding vows were so beautiful.”

Like the Brangelina couple, Neil and David also involved their children in the wedding ceremony. US Magazine has more:

The highlight of the evening, according to the chirpy blonde hostess, was Harris and Burtka’s twins, Gideon and Harper, who were part of the ceremony. “Harper was going to be the flower girl and Gideon was going to be the ring bearer,” Ripa revealed.

Later that evening, Ripa met up with little Gideon on the dance floor and thanked him for the fruit! “We were dancing I said to him, ‘Look, Gideon. I saved your orange because I’m gonna keep it forever.’ And he goes, ‘Oh, you shouldn’t. They’re so delicious!'”

We’re with Gideon on this one. You can’t keep an orange forever because they are going to spoil. Eat them while they are still eatable. Haha.

Congratulations to the newlyweds! Here’s another pic of the twosome coosome: 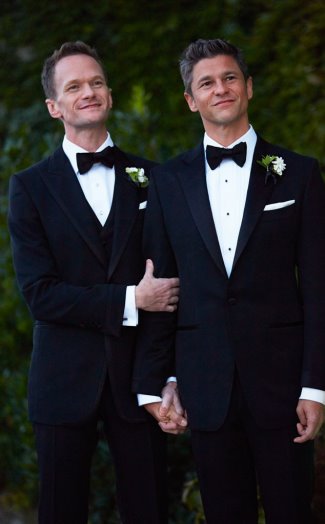 For the FashionWatchers, you might be interested to know that the couple wore custom tuxedo suits by Tom Ford. [Want more Tom Ford Suits for Men?] The ceremony was officiated by producer and director Pam Fryman and Elton John reportedly sang at the wedding. Yay!