Herpes Baby’s Kiss of Death & Deadly Circumcision Rituals. This is one of the saddest stories we’ve ever read. Who’d have thunk that an act of love could be deadly. We hope that Ruth Schofield’s advocacy to increase public awareness for Herpes Simplex Virus would get the government and media support it deserves. 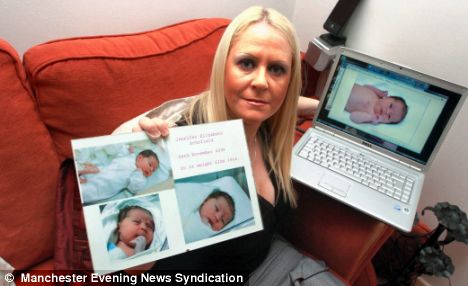 From the Daily Mail: “A newborn baby died after her mother accidentally infected her with the herpes virus, an inquest has heard. Ruth Schofield kissed and breastfed baby Jennifer, not realising she had passed on the deadly virus on to the newborn who had not built up an immunity to it.”

Damn, that’s really tragic. The paper adds, “The inquest found Jennifer had died from Herpes Simplex Virus (HSV), which her mother had probably caught during the late stages of her pregnancy. The virus attacked the baby’s major organs and Jennifer died at just 11 days old.”

Our condolences to Ruth and her family.

…..
Back in 2005, a New York baby boy died from herpes which he may have contracted during a circumcision ritual. It’s another sad ending which could have been prevented.

MSNBC has the story: “City health officials are investigating the death of a baby boy who was one of three infants to contract herpes after a rabbi circumcised them. Ten days after Rabbi Yitzhok Fischer performed religious circumcisions on twins last October, one died of herpes and the other tested positive for the virus, according to a complaint filed by the health department in Manhattan Supreme Court.The complaint, reported in Wednesday’s edition of the New York Daily News, also said health officials later found a third baby who had contracted herpes after being circumcised by Fischer in late 2003.”

More from the MSNBC report: “Under Jewish law, a mohel — someone who performs circumcisions — draws blood from the circumcision wound. Most mohels do it by hand with a suction device, but Fischer uses a practice rare outside strict Orthodox groups where he uses his mouth to draw blood after cutting the foreskin.”

UPDATE: The result of the investigation by the New York City Health Department concluded that the rabbi did indeed transmit the herpes virus during the controversial circumcision procedure. Following the above tragedy, the NYC Health Department issued a statement encouraging rabbis to discontinue the practic of metzitzah b’peh.

Here’s part of said health bulletin: How metzitzah b’peh spreads herpes: In metzitzah b’peh, the mohel places his mouth on the freshly circumcised penis to draw blood away from the cut. If the mohel is infected with oral herpes (as most adults are), metzitzah b’peh can expose the infant to the herpes virus. While severe illness associated with this practice may be rare , there is a definite risk of infection. Oral herpes spreads easily through saliva, especially when saliva touches a cut or break in the skin, such as during metzitzah b’peh.Most people with oral herpes don’t know they are infected and don’t have symptoms. Even without symptoms, however, people can spread the infection. Because the immune system of newborns is not developed enough to fight serious infection, herpes infections pose grave risks to infants.”