Milan Baros Shirtless Photos. Don’t you just love footballer Milan Baros (striker for Galatasaray) posing in his jeans like a … hmm, how should we say this … posing like a man slut? But then again, he’s not the first one to do something like this.

Here’s Milan looking awesome shirtless and giving a two thumbs up to his fans. 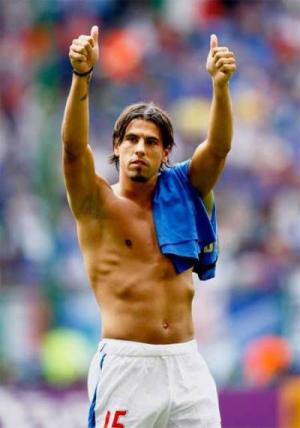 Milan shows off his biceps and his Chinese tattoos. Can anyone of you fellow Famewatchers read Chinese? Maybe you can tell us what his tattoos mean. 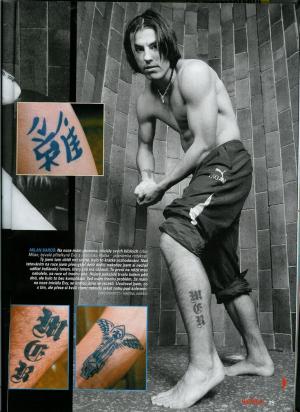 Here’s another Milan Baros shirtless photo where Milan throws his football shirt to his fans. Do you think he also has a career in baseball with the way he throws? 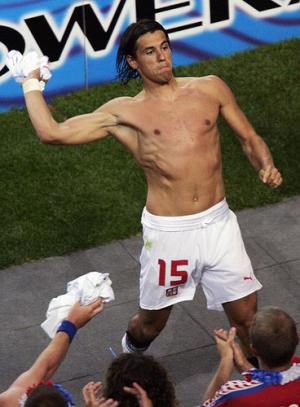 UPDATE: Milan talked about his tattoos in an interview with fans. Here’s what he said when asked to explain the meaning of his tatts: “On my leg I have the initials of my parents and my ex-girlfriend. On my hand I have an Indian totem. It should protect me…”

He also mentioned that he is still going to keep the initial of his ex-girlfriend. No word about the Chinese characters and what they mean though. Maybe he got them after the fan interview?

Milan Baros Girlfriend or Wife Update: Milan began dating model Tereza Franková in 2005. They tied the knot in 2009 and are blessed with a child, their son Patrik who was born 1 September 2009. Here’s a photo of Milan and Tereza during a vacation at sea. 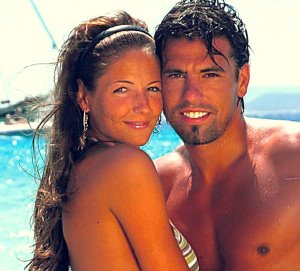