Mike Holloway Survivor Imaginary Boyfriend. We didn’t think we’ll find an imaginary Survivor boyfriend this season but then the premiere aired and we fell in love with Mike Halloway. Damn! Ain’t he a hottie? To quote our friend Deena, “He’s a hot guy who does not seem to know of his hotness which makes him move even hotter. That’s the best kind of hot!!!” 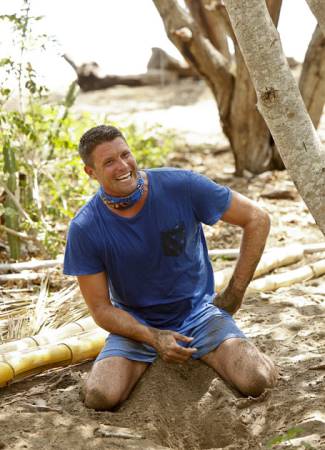 Doesn’t he look sexy in his coveralls? Mike is a lovable goof too! Him eating a deadly scorpion made us laugh and, at the same time, very concerned that he’s gonna poison himself to death. He reminds us so much of Eddie Fox, the lovable hunky fireman/EMT of Survivor Philippines. 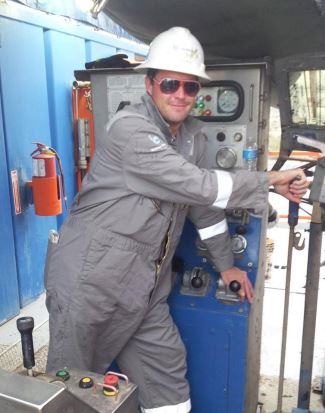 Mike Holloway Underwear. For those of you looking for photos of Mike in his blue boxers underwear. 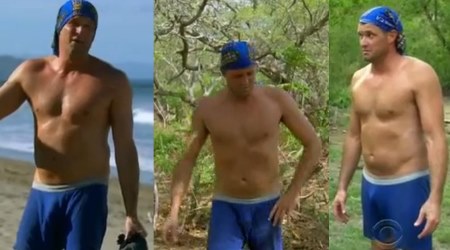 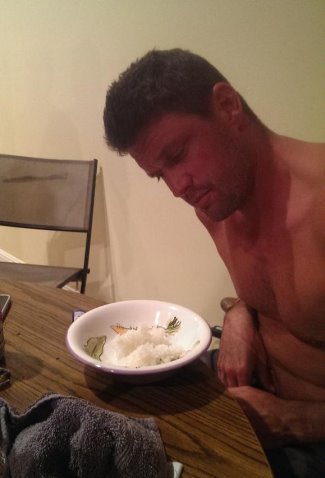 Want to know more about Mike the Hunk? Well, check out his CBS profile below. There’s no word on his relationship status so girls (and gays) can still dream about nabbing him as their boyfriend. Hehe. Anyhoo, here’s more about Mike from CBS:

Personal Claim to Fame: Paying off my house in 2 ½ years. It took a lot of Ramen noodle nights, but to see the focus and drive pay off, was priceless.

Inspiration in Life: Don Couch-He is the man and I call him “Dad.” Even though we are in no way related he took it upon himself to teach me how to be man. He is a man of morals and values and he is a man of his word. He means what he says and is who he says. What a mentor.

Hobbies: Disc golf, running and picking up the ladies! Haha!
What is your favorite sport? When I was younger, it was playing football because the sound of someone losing their air is awesome. Now that I am older, it is disc golf because I love the challenge of me against the course.

Pet Peeves: People who are bad at time management. If you say you’re going to be somewhere at a certain time, be there! Also spelling, I can’t stand it when someone can’t spell.

3 Words to Describe You: Loyal, Ambitious and Clever.

If You Could Have 3 Things on The Island What Would They Be and Why? 1. Any ball because I can make a game out of anything, MacGyver-ish in this case. But it would be nice to have a ball. 2. Toilet paper because it kind of stinks rubbing your bum with your hands. 3. Tooth brush because it’s refreshing not having yuck mouth.

SURVIVOR Contestant You Are Most Like: Cochran, because he knows the game and how to move pieces; Ozzy because that dude has the best posture of anyone and he’s a bad ass; and Rob because he takes over and gives 110% at everything.

Reason for Being on SURVIVOR: There’s a competitive fire inside me. I can’t get enough. I live to compete daily in my own life. If you guys let me loose on the challenges you will see. Also, I want to see if I am as good of a manipulator as I think I am.

Why You’ll “Survive” SURVIVOR: I have a never-quit attitude. If I have to die, I will before I quit! I am also confident in who I am and what I can do and can’t do. The ole ‘fake it till you make it’ applies here. I also am a leader; people naturally flock to me because of my outgoing attitude on life.

Why Will You Be the Sole SURVIVOR: My life is constantly changing. At work, I must adapt to what the oil well is doing and sometimes drastic measures need to be taken. In my personal life, I have had to overcome being molested and bullied when I was young and not having a father. Learning to be influenced by the right people has been no easy chore. I have grown into my own skin – I know who I am and what I am about. My faith has made me whole, my family and friends have me strong, and my experiences have made me adapt. Let’s get it on!!!!