Michael Vartan Shirtless and Underwear Pics. We should have included Michael Vartan in our list of Shirtless TV Daddy Hunks but, since we did not, here’s a post dedicated to the 45-year-old French-American actor.

What kind of underwear does he wear? If we go by the photo below (screen capped from one of his TV shows), our onscreen Michael likes to wear boxer shorts.

An unobstructed view of Michael in his boxers. 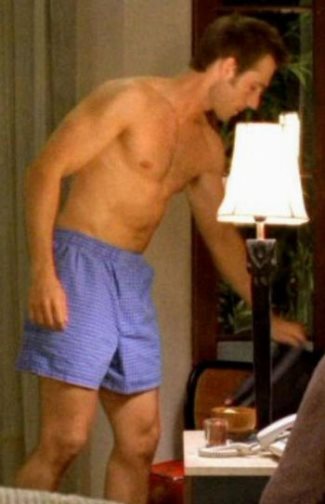 So TV-Michael wears boxers, what about real-life-Michael does he wear boxers or briefs? Unfortunately, we don’t know, we’d like to think that he wears briefs (particularly tighty-whitie briefs) but we have no proof that he does. Bummer, no?

Want to go to bed with a young Michael Vartan? Here’s your chance, only that you can only do it in your dreams. Haha. Wouldn’t it be cool snuggling in bed with this guy? 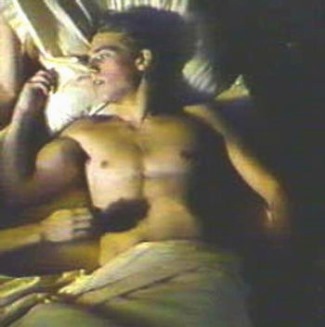 Is Michael Vartan Gay or Straight? He’s married (since 2011 to Lauren Skaar), so we are going to say that he is straight. But the voters of gayorstraight.com have a different take, here’s their gaydar rating for the actor:

He’s highly gay? Nah! We think the voters’ gaydars are off on this one.

By the way Michael Vartan fans, you’d be happy to know that our hunk has a new show on TV. From The Hollywood Reporter:

Michael Vartan is joining the USA family. The Bates Motel and Alias alum has landed a recurring role on the upcoming male escort drama Satisfaction, The Hollywood Reporter has learned.

Told through the lens of one couple, investment banker Neil Truman (Matt Passmore) and his wife Grace (Stephanie Szostak), Satisfaction — centered on a marriage at its midpoint — attempts to answer the question, “What do you do when having it all is not enough?”

Vartan will play Dylan, a daring photographer who helps Grace gain exposure in the design world.

Wouldn’t it be more interesting if Michael is playing the role of a male escort rather than a photographer? We’d be watching that!