Says a source (via Daily Mail): “Other than the Jackson family and the Forest Lawn management, no one knows the exact spot. Staff at the cemetery have been fed several locations, it’s as if they’re hoping to confuse everyone. The fear is that thousands of Jackson fans will descend on the cemetery and damage or deface the grave.”

What do you think of this Michael Jackson secret grave nonsense? Does Michael have the craziest of fans who will either desecrate him or venerate him? Or is the Jackson family over-estimating Michael’s importance in the scheme of things?

On the other hand, check out this story about an E-bay entrepreneur who kinda made money from a celebrity grave. Maybe the Jackson family have a point after all. 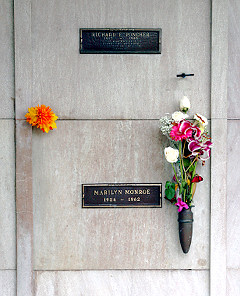 You may not approve of what she’s doing but you gotta give props to Elsie Poncher for coming up with a novel idea to raise funds: she sold her husband’s crypt, which is located above Marilyn Monroe‘s, to the tune of US$4.6 million.

Elsie may not be in the list of the world’s most powerful women in business but, boy, isn’t she some kind of a genius?

Reports the NY Daily News: “Beverly Hills widow Elsie Poncher is auctioning off her husband’s crypt, which is directly above the American icon’s final resting place at the Pierce Brothers Westwood Village Memorial Park cemetery. Bidding hovered at an eye-popping $4.6 million Monday with slightly more than two hours to go. ‘Here is a once in a lifetime and into eternity opportunity to spend your eternal days directly above Marilyn Monroe,’ the eBay auction description states.”

According to the report, the now 80 year old widow plans to use the proceeds of the sale to pay off a $1.6 million mortgage on her Beverly Hills home. Well, that’s good financial planning if you ask us.

Good for you, Elsie. We won’t be surprised if Elsie started a trend where people with crypts/graves/memorial plots near famous celebrities will sell them for oodles of money. The Jackson family may not be all that wrong after all when they reportedly decided to keep Michael’s grave super-secret.