Is Michael Clifford the male version of Angelina Jolie? He thinks he is and said so in a Tweet he sent his followers that went, “My lips are huge, I’m Mangelina Jolie.” Well, decide for yourself whether he’s got huge lips a-la Angelina. 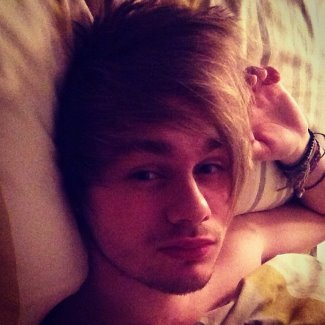 We don’t know about you but his lips look like regular size to us. They’re really not Jolie-like, no? Here’s another photo. 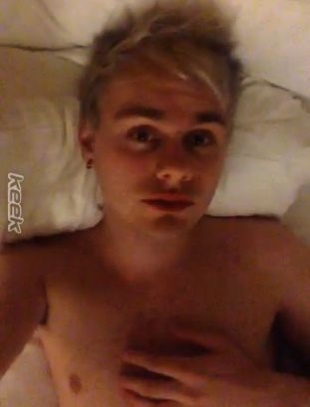 Okay, maybe its a little bigger than regular-sized lips but they’re not really huge like he’s saying. Maybe he was just joking, no? Now, what is “keek”? We don’t know what that is and whether it means anything and we are too lazy to google it ourselves and find out. Haha. Sorry.

Anyhoo, for those of you oldies who are wondering about who this guy is, his name is Michael Clifford. He is a member of a new boyband called 5 Seconds of Summer (5SOS). It’s an Australian band but they are on their way to conquering the world following the route taken by the British band One Direction. If you missed out on our first installment focusing on the members of 5SOS, go check our post on Calum Hood.

Here’s another Michael Clifford shirtless photo for you. That’s fellow 5 Seconds of Summer boybander Ashton Irwin. Now, it looks like that Ashton guy actually has some Jolie-like lips. Haha. 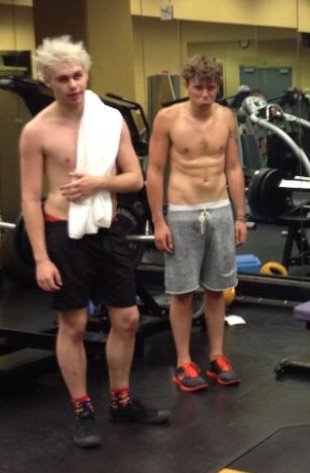 Is Michael Clifford Gay or Straight? He is straight but according to his wikia trivia, he “would turn gay for his guitar tech and claims he looks like Pete Wentz”. Huh. We gotta see that guitar guy if he really looks like Pete Wentz. Also, we wouldn’t allow our beau to turn gay for a Pete Wentz look-alike because Pete is not worth turning gay for. Haha. He should look like classic handsome hunks like Brad Pitt or George Clooney and maybe someone who looks like Adam Levine. Wink. Wink.

Is Michael Clifford Single? Does Michael have a girlfriend? It looks like he’s single and pretty much available at the moment but, according to his wikia profile, he dated a girl named Georgia and that he has an ex named Geordie Gray. Are Georgia and Georgie Gray one and the same gal? Oh wait, maybe he is no longer single because he maybe dating a girl named Camila Cabello who’s apparently a member of a girl group called Fifth Harmony.

That’s it for now, watch out for our upcoming posts on other members of the 5SoS band – Ashton Irwin above and another one we can’t recall at the moment. Anyhoo, check back later. Danke!