Mens Running Shorts: Tom Cruise Hollywood Workout. Dressed in his black running shorts, celebrity Scientologist Tom Cruise goes a-running with his wife Katie Holmes. This is probably the first time ever we see the actor doing some physical exercise stuff. He is obviously trying to beat the coming beer belly, which is every celebrity’s Enemy Number One as they grow older. 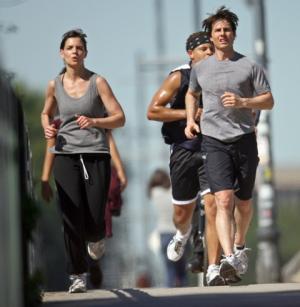 If Tom keeps running, he won’t be needing them men’s body slimming shirt which are designed to hide the bulging midsection.

Now, is it me or is Tom, like Simon Cowell, growing him some man b**bs? Unfortunately, we don’t think Tom can get rid of that by simply running. 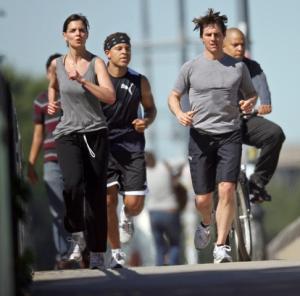 We gotta give credit to Mr. Mission Impossible for keeping himself in tip-top shape by running. Here are more running photos of the Hollywood A-Lister. Say what you will about Tom (and we’ve said some negative things) but you gotta admit that it is pretty cool to see him running with his wife, Katie Holmes. 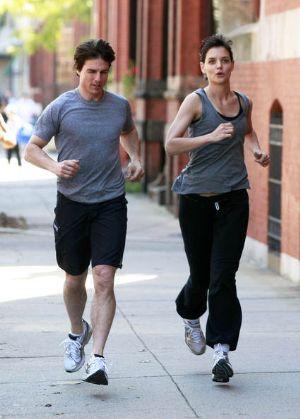 Run, TomKat, run. Here comes ….. hmmmm, we’d like to say Brangelina but we never saw the Jolie-Pitts running ever ever. [Maybe Brangie are too busy doing their charity work.] 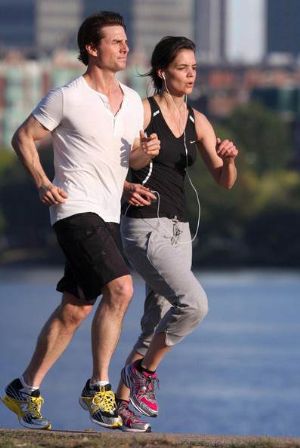 By the by, that’s a New Balance shoes our TomDaddy is wearing above. 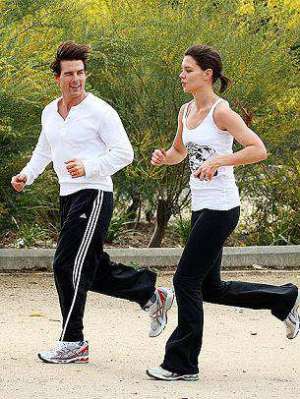 Our title says Mens Running Shorts but who says you should limit your running apparel to shorts? Not us. Not every runner we know. And certainly not Tommy who opted for a pair of Adidas jogging pants in the photo above. Want more celebrities wearing Adidas?

A bare-chested Tom Cruise and a very wet Cameron Diaz run for their lives in this scene from their movie, Knight and Day. Said movie is a flop (by Tom Cruise standards) but he has apparently recovered his box office appeal with his latest Mission Impossible movie. Way to go, Tommy boy.

Want more Tom Cruise fashion style? Check him out in our post on Celebrities in Brown Leather Jackets.