Mens Panties: Uplifting Japanese Briefs Underwear. Here’s a Japanese version of the men’s enhanced push-up underwear, it’s probably the most awesome version there is because its designed like a woman’s panties. Compare it for instance with the kinda ordinary Croatian, Spanish, and Andrew Christian’s versions of push up briefs. 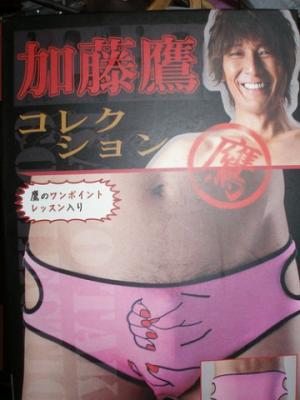 We are, of course, not surprised that our friends from Japan (aka The Land of the Rising Sun) are the ones who brought us this men’s panties. After all, they brought us the male bra, the awesome fundoshi, and this really weird thing called the bagelheads.

Oh, by the way, we read somewhere that these Japanese panties for men are called manjapanties.

…..
Update: Male Celebrity Who Wears Panties Our earlier post on how there’s a market for men’s parties in Japan reminded us of an episode in Friends where Joey Tribbiani (Matt Leblanc) noticed Phoebe Buffay’s boyfriend wearing panties. Phoebe, played by the divine Lisa Kudrow, defended his boyfriend’s cross-dressing by saying that it takes a real man to wear a woman’s undergarment. 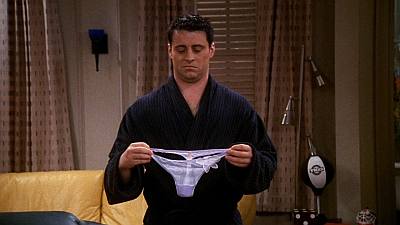 Joey: Listen, you know how uh, when you’re wearing pants and you lean forward I check out your underwear?
Phoebe: Yeah!

Joey: Well, when Jake did it I saw that…he was wearing women’s underwear!
Phoebe: I know. They were mine.

Joey: Oh. (Laughs.) No! No wait, that’s weird!
Phoebe: No, it’s not! We were just goofing around and I dared him to try them on.

Joey: That’s…kinda hot.
Phoebe: I think so too. And that little flap? Great for holding my lipstick.

Joey: Yeah, I wouldn’t know about that.
Phoebe: And! Y’know what Jake says? That women’s underwear is actually more comfortable. And he loves the way the silk feels against his skin.

Joey: Yeah well next thing you know, he’ll be telling you that your high heels are good for his posture!
Phoebe: There is nothing wrong with Jake! Okay? He is all man! I’m thinking even more than you.

Joey: Oh yeah, he looked like a real lumberjack in those pink laceys.
Phoebe: I’m just saying that only a man completely secure with his masculinity could walk around in women’s underwear! I don’t think you could ever do that.

In the next scene, Joey himself is wearing a pair of girl’s undies and talks about the virtues of women’s panties as well as the many choices that women have when it comes to their underwear.

Joey: Hey Pheebs! (He sits down next to her.)
Phoebe: Hey!

Joey: Check it out. (He turns around, pulls down his pants, and shows Phoebe that he’s got panties on.) How much of a man am I?!
Phoebe: Wow! Nice! Manly and also kind of a slut. 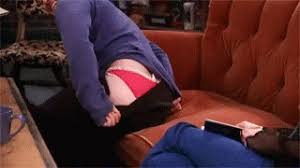 Joey: Yeah! And-and things aren’t as…smashed down as I thought they were gonna be.
Phoebe: That’s great Joe!

Joey: Yeah! And you have so many more choices than you do with men’s underwear!
Phoebe: Uh-huh.

Joey: Pantyhose! Y’know? They way they start at your toe and go all the way up to here… (He mimed that and stops when he realized he went to far.) I should go take these off shouldn’t I?
Phoebe: I think it’s important that you do.

Oh come on now, Phoebe. There’s really nothing wrong with a man wearing pantyhose, is there?