Mens lingerie underwear, anyone? Things are getting serious in the men wearing women’s clothes department. When we started blogging about the subject a few years ago, guys who wear women’s underwear were mostly doing it for fun [like Henry Burris and his bra] or they are playing a role in a TV show or a movie. 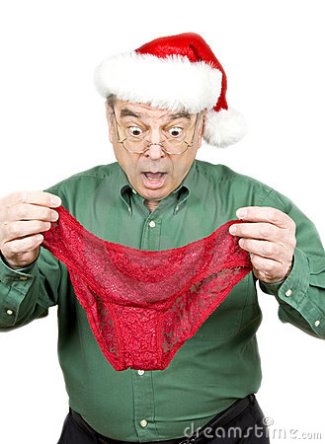 Nowadays, a growing number of men buy women’s underwear (or clothes) simply because they like wearing them. So there’s an unserved market for women’s-style underwear for men. And an Australian company called Homme Mystere is rising up to the challenge by selling mens lingerie, panties, bras, nighties, camisoles, and frilly teddies for men. Wouldn’t you want to play with your man while he is wearing something like this? 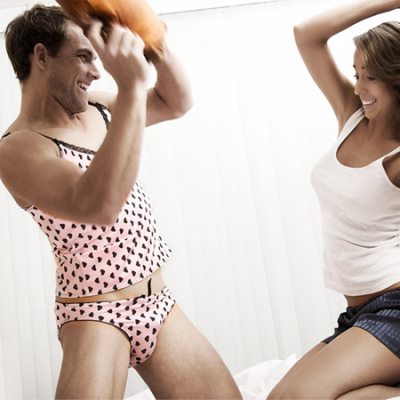 Founder Brent Krause explains why he and his wife decided to establish Homme Mystere (via heraldsun.com.au): “If you search for men’s lingerie on the web, normally the only stuff that comes up is novelty items and that sort of rubbish. If you’re going to call something lingerie, put a bit of bloody effort into it.”

Brent tells us more about his mens lingerie underwear venture (via The Sun):

If you like anything aside from cotton, then your choices are very limited but walk through a department store and the ladies underwear section is huge. It’s as if designers leave their imagination at the door and believe their only options are colour, trunks or briefs. Of course you can buy men’s ‘lingerie’ — as long as it’s the novelty variety.

So we decided to do something in a fitted stretch satin with a bit of a lace edge. And it was popular. Then we received a few requests for bras, teddies and camisoles. And we thought ‘Why not?’

Why not, indeed! Why should men be limited on their choice of underwear to boring boxers or briefs made of cotton when they can wear nicer undies made of silk, satin, lace and other fabulous fabrics. Mens lingerie rules! [Confession time: We actually bought three pairs for our hubby three months ago. He is lovin’ it! Nope we didn’t buy from Homme Mystere but from a “specialty” store.]

How much should you pay for mens lingerie underwear? For men’s lingerie, the price ranges from $20 to $35 at the Homme Mystere website. Male lingerie, of course, includes G-strings, to sheer panty briefs, to boyshorts, to satin briefs. Meanwhile, men’s bras sell at $22 to $43. Lastly, frill teddys and camisoles are sold at anywhere from $24 to $54. Not bad, eh?