Mens Corsets Will Slim You Down in a Fashionable Way. Check out this men’s slimming corset on French male model Matthieu Barnabe. It is the “perfect” solution for guys who would like to slim but who don’t have the time to hit the gym.

We say “perfect” in quotes because the perfect solution really is to find time to exercise to rid yourself of them extra fat you’ve been carrying around your midsection and other parts of your body. Trust us, not only will you look better, you will be much healthier too.

Vintage Mens Corsets (11 June 2011): Not surprisingly, men’s quest for thinner and slimmer waists is not a modern thing. It actually dates back to God knows when. Check out this vintage advertisement for male corsets designed for “men in their 30s, 40s, and 50s who want to look slimmer and feel younger”. Given how fat people have become in this generation we’d like to think that some men in their 20s would also want to buy a slimming corset. 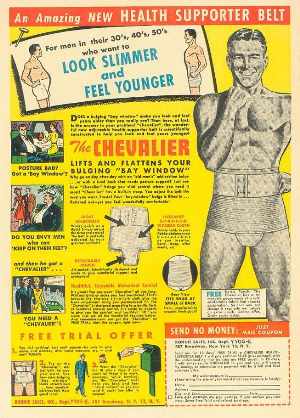 The Chevalier “supporter belt” (understandably, they didn’t call this product a “corset” maybe because it sounds too girly) “lifts and flattens your bulging ‘bay window'”. [We’re guessing “bay window” refers to your lower abs?] This wonderful product has a “front adjustment”, a “two way stretch wondercloth” which holds your flabby adbomen but because it is stretchable, you can breath, bend, and stoop, and a “detachable pouch” which is probably the most intriguing feature.

Anyways, aside from the fact that guys in the past used mens corsets, its also worth noting that this garment is used across cultures. Here’s a picture of two guys from the Dinka people of Sudan wearing corsets. 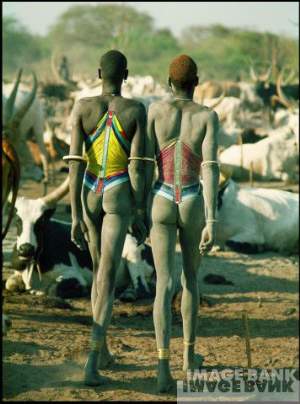 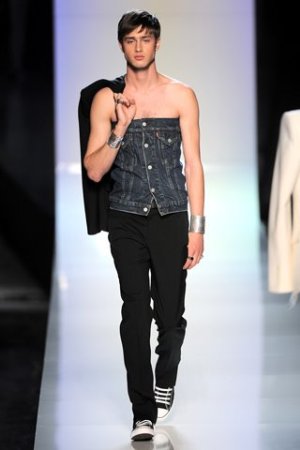 Not to be outdone, British designer John Galliano also came up with his own versions of designer corsets for men. 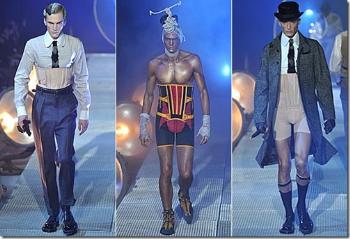 UPDATE: MENS CORSETS USER REVIEWS. We are publishing what some of you who are saying about mens corsets.

William: Corsets have been around for many years for both men and women. Who says a man can not look good, or even feel good to himself. I sure do. I agree, you feel much better in one, it is a great feeling. What is better, it is the best way to loose weight, actual weight. I wear my extremely tight but not in the chest which can be dangerous to the heart. It compresses the gut down, so there is less space of course. Just have a glass of beer, and you feel like you had 2 bottles. Have few bites of food, and you are full. When I need to drop weight in an emergency type effort, few days I can drop 4 or more pounds. Besides making you look great, feel great, it is very good for weight lost, believe me, it Works.

Smart: I think we should make it more known that men also wear corsets. I do so on a regular basis and am very comfortable with it. I would not want to miss this opportunity and when speaking to other men most of the time they regret that due to formalism they can not even try. Its a shame that in this world we can not stay 100% male when wearing corsets or skirts.