Mens Button Jeans: Abercrombie Denims and Levi’s Unbuttoned. Abercrombie, the shameless discriminator of people it perceives to be “non-beautiful”, tries to flatter the male psyche by coming up with a billboard of a guy with bulging jeans. “Buy Abercrombie because you have a big one” appears to be the message of this particular ad campaign. 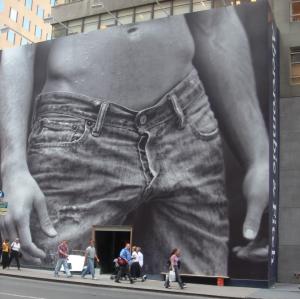 We’d like to think that men are not that shallow but, well, our dude friend Kevin says they are and that they’re likely to buy Abercrombie jeans for precisely the reason Abercrombie wants them too. Ugh.

Anyhoo, if you are looking for mens button jeans but do not like to buy Abercrombie because of its discriminatory policies, your best option would be Levi’s Unbuttoned. Check out our imaginary Indian boyfriend Akshay Kumar looking good in his Levis button fly jeans.

Hunks Wearing Mens Button Jeans (posted: 29 September 2009). Enough with the boxers or briefs debate. That debate, though interesting at first, is as dated as the old-but-still-trying-to-be-young Madonna.

The more important debate now for male fashion should be button jeans or zipper jeans. Which is better, a pair of jeans which you zip up and down or one which you unbutton, well, button by button?

Jeans with zippers are, of course, more convenient to use. However, the idea of unbuttoning your jeans (or one’s jeans a-la Akshay Kumar and his wife who got in trouble for their very public jeans unbuttoning) sounds sexier and more romantic. What do you think? You agree, right?

It is worth noting however that, like zipper jeans, you can experience a wardrobe malfunction when you are wearing button jeans. Take for instance actor Ryan Phillippe who was unaware that he left his fly unbuttoned in the pic below.

Let us end this post with a shirtless Andrew Gray wearing button jeans. Andrew is a model and actor who is most famous for playing the role of Troy Burrows in Power Rangers Megaforce.