Mens Bonds Underwear Model: Michael Clarke, Cricket Player. You loved our earlier post on cricketer turned men’s underwear model Michael Clarke so we decided to do a follow post on him. Here’s an OK Magazine interview with this hunk about his Bonds commercial with Pat Rafter. But first, here’s our Michael with an open shirt:. 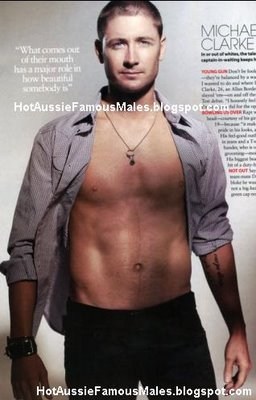 On the runway surrounded by girls: 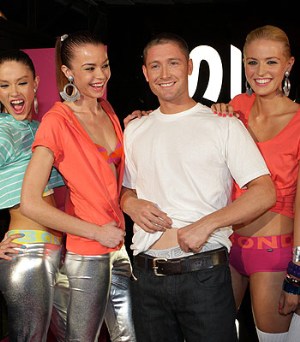 What was your first reaction when Bonds said you’d need to appear in your undies?
I was a little nervous at the start, however Bonds have a great team and made me feel really comfortable.

What does Lara think of you posing in your undies?
Lara thinks the photos look great.

Did you do any special exercises leading up to the undies shoot?
No, I didn’t get the chance to do any extra training. My cricket schedule keeps me pretty busy.

Were you self-conscious?
I feel comfortable in my undies in my own environment, however in front of a camera and crew it was a little intimidating.

Have you had any remarks from the general public about appearing in your undies? Any funny stories?
No, not yet!

Have you been hassled by teammates?
Not really, most of the boys wear Bonds anyway and they’re loving the free undies.

Did you have to practice playing tennis with a cricket bat?
No, I didn’t have a chance to practice. It helps when you have a professional tennis player hitting it in the right spot.

Do you think you could really take on Pat Rafter in a tennis match?
No chance! Cricket maybe!

Can you really catch a ball in your undies??
I did it a handful of times for the TV commercial. But I won’t be racing off again to do it!

Mens Bonds Underwear Male Models: Catwalk Hunks. Meet these hunky male models in Bonds boxer-briefs underwear. Nice color combination, no? We like the red one the best because it adds fire and sizzle in the bedroom. Seriously, reddish underwear is more likely to turn on your partner than those with other colors. Want more men in Bonds underwear? Check out the following blog entries below. 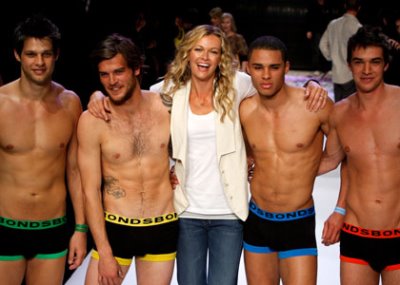 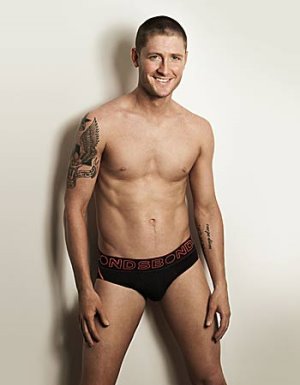 Michael Clarke stars in this cheeky underwear commercial described by News.com thus: “The cricketer strips to his underwear while playing tennis with Pat Rafter, using a cricket bat instead of a racquet. He then catches a tennis ball in his undies, challenging Rafter to pick it out with a cheeky: ‘our serve, Paddy’.” Here’s the video. Update: Sorry, video disabled at source.