Mens Body Shaping Underwear: Hom By Triumph. Are you a man trying to win the battle of the bulge? What about using a body shaping underwear for men? Seriously. Well,this is actually old news from 2006 but we find it interesting so we are re-printing this story about how Japanese men in their 30s and 40s are using body shaping underwear. We’re not sure if the trend still continues in Japan or whether it caught on in other countries.

“Body-shaping underwear for men has been selling surprisingly well,” said Kazumi Yoshihara, manager of Triumph International (Japan) Ltd.’s male underwear sales division. “The main buyers are those in their 30s and 40s.”

The underwear maker has been successful in selling ladies’ body-shaping undergarments, but is mining a new market among men as well.

In fact, men’s long girdles launched by the company have become hot-selling items even though men have long tended to avoid tight-fitting garments.

We might be mistaken but we think these men’s pelvic girdle underwear from Hom [Triumph Underwear’s male division] is the one that the above article is referring to. 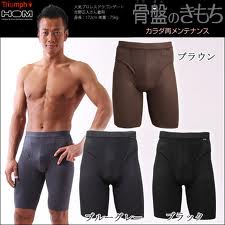 Question to you fellow Famewatchers: Does this male model really need a slimming underwear?

The mens body shaping underwear by Triumph (aka Hom Girdle Underwear) is getting pretty good reviews (average of 4.5 stars out of 5) in rakuten.com, Japan’s biggest online shopping mall with over 50 million users. Here are some of the feedback (translated via Google Translate). Let’s start with those who gave the hip-hugger the highest score of 5 stars:

Of course, there are those who were not entirely satisfied with the Hom mens body shaping underwear. Comments from those who gave it 2-3 stars (via Google Translate):

So there you have the reviews of our Japanese friends on their body-shaping hip-hugger. The translations may not be 100% correct but we guess you’ll get the gist of what the people who bought and used the product are saying.

Oh, by the way, you might want to check out this video about another Japanese fashion trend, the male bra.